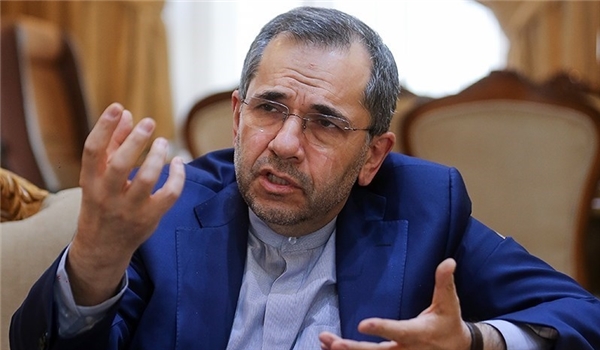 TEHRAN (FNA)- Iranian Ambassador and Permanent Representative to the UN Majid Takht-e Ravanchi lashed out at the US for its measures against the nuclear deal, saying that the JCPOA is annexed to the Resolution 2231 which makes both of them imperative.

“The US—with media stunts—continues to claim JCPOA has no legal standing at UN,” Takht-e Ravanchi wrote on his twitter page on Wednesday.

“But JCPOA is annexed to UNSCR 2231, and US has legal obligations to implement both,” he added.

“Article 2 of 2231 calls upon members to support implementation of JCPOA: the US is shirking its responsibility,” Takht-e Ravanchi said.

In defiance of global criticism, the US unilaterally withdrew from the JCPOA, which President Donald Trump called “the worst deal ever,” in May 2018 and re-imposed the anti-Iran sanctions.

Washington has also been attempting in the past few weeks to use a threat to trigger a return of all UN sanctions against Iran as leverage to get the 15-member Security Council to prolong the arms embargo on Tehran.

The removal of Iran's arms embargo is based on the nuclear deal between Tehran and major world powers, officially known as the Joint Comprehensive Plan of Action (JCPOA).

TEHRAN (FNA)- The wildfires in Oregon left a trail of devastation in their wake in the small town of Gates, as seen. The local primary school can be seen gutted by fire, while burnt out lorries and other fire damaged buildings can also be seen in the area. [VIDEO]
﻿
﻿
Sections