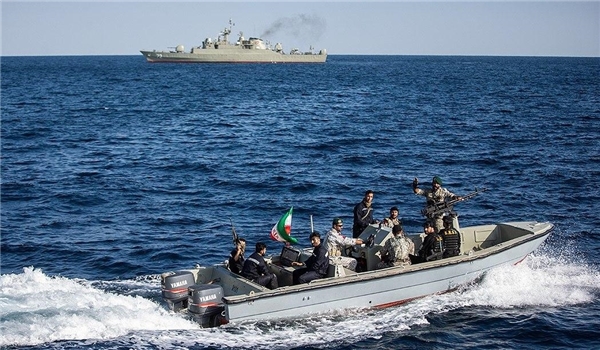 General Nilforoushan said that the operational and final stage of the drill has begun since Tuesday in the general area of Hormozgan province, West of the Strait of Hormuz and the Persian Gulf extending deep inside the country.

“This drills are being conducted with the participation of IRGC Navy and Aerospace forces," he said.

He went on to say that combat preparation in all levels, exercise and assurance of conducting operational plans, enhancement of coordination level in conducting joint operation, exercising defense and offense in electronic warfare and stabilizing of multilayer communications are among the objectives of the drill.

Nilforoushan enumerated maintenance of aerial and marine connection lines and continuation of preparatory logistics, exercising different scenarios at headquarters level and resilient and rapid designing coupled with bilateral war game as other objectives of this great drill.

He also stressed that the spirit of aggression and offense is shaped through popular mobilization, adding that, modern designing on the basis of compound and network-oriented wars with IREGC’s aggressive doctrine, maximum usage of various signal, optic manned and unmanned capability and equipment with the aim of intelligence mastery and conducting of drill in the conditions of biological war are among the features of the “Great Prophet-14 drill.

The commander noted that the drills have conducted anti-ballistic and cruise missile defense systems and some of the surprise equipment and weapons, including high-altitude ballistic missiles capable of hitting invading floating targets at far distance have also been used.

In a relevant development last year, Commander of the Islamic Revolution Guards Corps (IRGC) Navy Rear Admiral Alireza Tangsiri announced that his forces would use new home-made arms in naval drills in future.

"New weapons are assessed, tested and used in the wargames and new arms produced inside the country will be used in future drills," Rear Admiral Tangsiri said on October 28, 2019.

He underlined that the IRGC Navy's power and capabilities are constantly assessed to keep full preparedness against enemies.

"Now, the IRGC Navy is fully prepared and this readiness is increased day by day," Rear Admiral Tangsiri said.