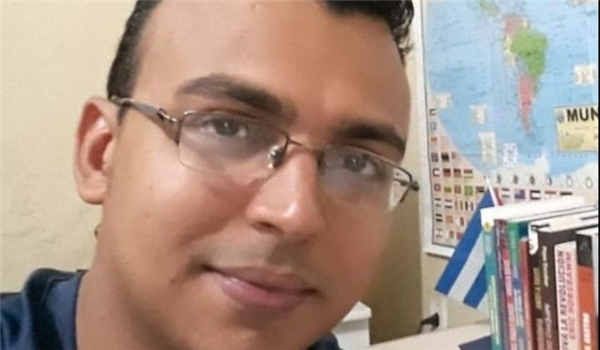 TEHRAN (FNA)- Alan Dantas, Brazilian journalist, says Jair Bolsonaro is securing his position of authority, overlooking the fact that the national health sector can hardly cope with the killer virus.

In an exclusive interview with FNA, Alan Dantas said dismissing Luiz Henrique Mandetta, the former Health Minister, was an indication that “Bolsonaro is currently more concerned with saving his own position in the government which is in severe crisis, than commanding the country in the fight against coronavirus”.

He further asserted Bolsonaro’s taking the path of the US President Donald Trump to neglect the risk of Covid-19 has changed the climate of opinion against the his government. “Many who supported Bolsonaro in 2018 [now] understand that they made the wrong choice. Even former allies, like the traditional right-wing parties, are now jumping out of Bolsonaro boat, leaving him in a political isolation.”

Alan Dantas is a Brazilian journalist, press officer, radio producer and the editor of Dossier Sul, a news website focused on international issues and diplomacy based in Brazil.

Q: There were many disagreements between President Jair Bolsonaro and the dismissed Health Minister Luiz Henrique Mandetta. Why were there so many clashes in the cabinet over Covid-19?

A: Since the beginning of the Covid-19 outspread in Brazil, former Health Minister Mandetta adopted a stance which was not favored by President Jair Bolsonaro. Mandetta carried out his work in line with the WHO guidelines, such as practicing isolation, stopping economic activities and sending federal aid to Brazilian states. Bolsonaro, like the US President Donald Trump, believes that Covid-19 is a disease which may expose people to a slight danger (like the common flu) and that the country should return to normal life. Over time, the differences between the policies adopted by the former health minister and president became evident, which was clearly pointed out by Mandetta in an interview right before his dismissal: "there is clearly a mismatch between the Ministry of Health [and the Planalto]."

On the other hand, Mandetta won the trust of the people, and enjoyed increasing popular support for his decisions on the outbreak. At the same time, the fact that Mandetta overlooked presidential statements made Bolsonaro worried that the health minister would change the public opinion towards him. Thus, Mandetta was dismissed and replaced by oncologist Nelson Teich, a business consultant who is totally passive in the face of the decisions of the president and his team.

Q: The shouts of “Bolsonaro, you are killer!” were heard in Rio de Janeiro and the rest of the country, when news of the sacking broke! Why did Brazilians protest the president’s decision?

A: Bolsonaro is in fact not committed to the health of the Brazilian population. The number of deaths by Covid-19 in Brazil has already surpassed the death toll in China. Asked about this fact, the president said: “So what? What can I do? I do not work miracles”. The reaction shocked the country. The dismissal of Mandetta, his former political partner, was a proof that Bolsonaro is currently more concerned with saving his own position in the government which is in severe crisis, than commanding the country in the fight against coronavirus. In all states, there is the collapse of the health system; as it is the case in the State of Maranhão, federal resources and equipment are blocked by the president.

It is widely believed that Bolsonaro has his own power project by creating chaos in Brazil; creating an environment conducive to a coup against the constitution. In one of stances, Bolsonaro replaced the head of the Federal Police (PF) with an agent close to his family, Alexandre Ramagem. Bolsonaro, then, called the institution, which is supposed to operate independently, "my Federal Police". Notwithstanding, the Federal Supreme Court (STF) nullified the appointment.

Q: People had seen how Bolsonaro powered his way to the Planalto Palace in 2018 election, as he repeatedly declared he is pro-America and would enjoy close relationship with Donald Trump. Do you think those who voted for him now regret?

A: The election won by Jair Bolsonaro was full of fraud and criminal practices that led him to the Presidency in 2018. The Brazilian social environment was divided between the middle class, the elites and the traditional right-wing parties that allied with Bolsonaro to defeat the Workers' Party (PT) and the poorest population.

With the spread of “fake news”, Brazilians lost confidence in political actors during presidential campaigns. At the same time, they were fueled by Bolsonaro's hatred and blinded to the consequences of their choice.

But, only now, many who supported Bolsonaro in 2018 understand that they made the wrong choice. Even former allies, like the traditional right-wing parties, are now jumping out of Bolsonaro boat, leaving him in a political isolation. One of his “super ministers”, Sergio Moro, has just left the government, which represented another great defeat for Bolsonaro.

The country's political situation continues to deteriorate and the country's future looks totally uncertain at this point. Amid all this, Brazilian victims of coronavirus continue to die in hospitals.