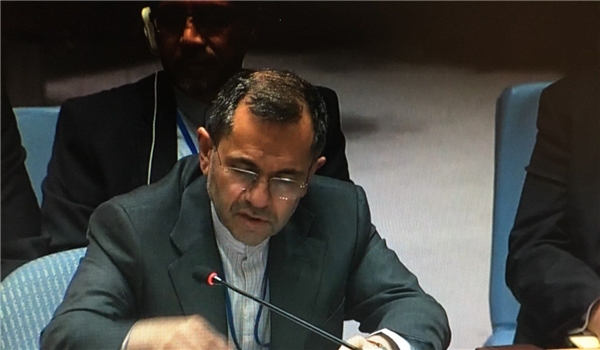 TEHRAN (FNA)- Iran’s Ambassador and Permanent Representative to the United Nations Majid Takht Ravanchi pointed to the 5th anniversary of the adoption of the UN Security Council's Resolution 2231, and said the US is still violating the resolution without being punished.

"Today is 5th anniversary of unanimous adoption of UNSCR 2231, which endorses #JCPOA," Takht Ravanchi wrote on his Twitter account on Monday.

"2 years ago, the US ceased—in its own words— 'participation' in JCPOA and relinquished all rights as participant," he added.

Takht Ravanchi reiterated that the US is obliged to abide by the UNSC resolutions, yet remains in violation of 2231.

Iran and the six world powers- US, UK, France, Russia, China, and Germany- reached a nuclear agreement, aka Joint Comprehensive Plan of Action (JCPOA), on July 14, 2015, after 13 years of intensive diplomatic talks. The US is no longer the participant in the deal as it withdrew unilaterally from the agreement on May 8, 2018.

Earlier, Iranian Foreign Minister Mohammad Javad Zarif in a message on the occasion of the 5th anniversary of signing Iran nuclear deal said the US’ contempt for diplomacy threatens the security in the US and the world.

Zarif in a letter to Borrell once again referred to the cases of European countries' non-compliance to the Joint Commission for settlement in accordance with Article 36 of the JCPOA.

Foreign Minister's letter warned that any interference in the ongoing cooperation between Iran and the IAEA would be contrary to the provisions of the JCPOA and could have negative impacts on the existing cooperation under the safeguards agreement, Foreign Ministry Spokesman Abbas Mousavi earlier said.