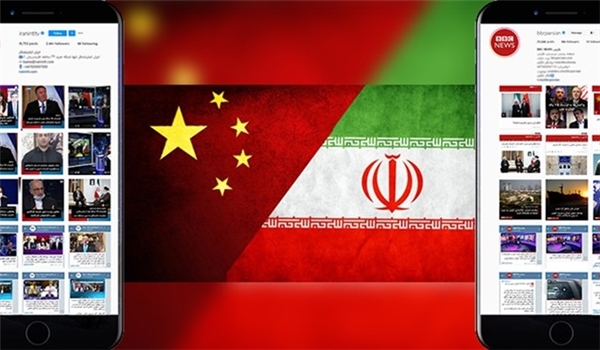 Social media users in the twitter and instagram as well as the Iranian people in the streets have been busy in the past few days with talks about a draft agreement for long-term cooperation between Tehran and China which is due to be endorsed after thorough negotiations by the two sides and once it receives the approval of the parliament in Iran in future. The draft looks more like a road map for all-out strategic cooperation in various political, economic, military, IT and cultural areas for now and is expected to go through months of negotiations by Tehran and Beijing before it is approved by the two Asian kingpins.

Yet, some foreign media outlets have sought hard to display the agreement as a top secret, while the topic for such cooperation had been declared and emphasized to the public in a statement during a visit by Chinese President Xi Jinping to Iran in 2016, one week after the implementation day of the nuclear deal between Iran and the six (now five) world powers, that included also China.

“Given the determination of both sides to develop relations and their complementary economic capacities and existence of different grounds for cooperation in the energy, infrastructural, industrial, technological fields and other areas, the two sides agreed to put on their agenda necessary consultations and negotiations to sign a 25-year comprehensive cooperation,” the paragraph 6 of the 2016 statement said.

More importantly, the Chinese president raised the issue of the 25-year-long cooperation in his meeting with Supreme Leader of the Islamic Revolution Ayatollah Seyed Ali Khamenei at the time.

“The agreement between the Iranian and Chinese presidents for 25-year strategic relations is fully correct and wise,” Ayatollah Kahamenei said in the meeting.

After Petroleum Economist released a report which claimed disclosing details of the Iran-China agreement, discussions heated up over the strategic interactions between the two countries again as the report included rumors claiming that Iran has agreed to relinquish control and authority over the Iranian islands (including the famous Kish Island) to the Chinese and deployment of Chinese military forces in Iran; rumors which were dismissed several times by the high-ranking and even local officials in Iran.

Although history, including modern history, has registered many such long-term agreements between states, including developed nations, the foreign-based opposition media, specially the Saudi-funded Iran International channel, rushed to the US State Department's company and started spreading rumors over the drafted road map of strategic cooperation between the two Asian powers and falsifying its contents to misrepresent (and even actually name) it as “another Treaty of Torkamanchay” - a notorious agreement between Iran and the Russian Empire, which concluded the Russian invasion of Iran after the latter's defeat in the war 1826–28. It was signed on 10 February 1828 in Torkamanchay, Iran. By the treaty, Persia ceded to Russia control of several areas in the South Caucasus.

As the English-language western media started tough warnings to Washington over the draft, saying that once put into action, it will deal a detrimental blow to the US and undermine its presence in the Middle-East, the US State Dep. intensified its smear campaign against the cooperation roadmap to such extents that it also named it Torkamanchay in its Persian-language Twitter account, followed by a mobilization of all its army of official and social media outlets, including Persian-language websites, satellite channels, twitter and telegram channels to provoke the public opinion in Iran against China.

But among others, Iran International TV and Radio played a main role in efforts to incite the public inside Iran to encourage them even to take to the streets. The media outlet is funded by the Saudi Crown Prince Mohammad Bin Salman via a Royal family tycoon owner and has close ties with all Saudi-backed groups and allies, including the son of the dethroned Pahlavi Regime, Reza Pahlavi and pro-Pahlavi monachists who have long had intimate relations with Riyadh as well as the Mojahedin-e Khalq Organization (MKO, also known as the MEK, PMOI and NCRI) terrorists.

In one of the interviews aired by the TV and Radio network, Ali Reza Nourizadeh - who is also notorious for his close ties with the Saudi intelligence body - called for even hotter and more powerful moves in opposition to Tehran's cooperation with China enticing the public to take to the streets immediately or wait for their country to be sold out to the Chinese.

The draft on Iran-China strategic cooperation is known by experts and analyst as a major stride for both nations to enjoy vast economic benefits and defuse the plots hatched by the US, Britain and Saudi Arabia. Hence, the three are no shy of displaying their outrage against the the expansion of Tehran-Beijing ties to the public, including through their own and their affiliated media.

A review of news reports and social media posts released by the Iran International and BBC Persia just on their Instagram, twitter and telegram accounts (away from their websites or TV and radio programs) on July 5-15 shows that 87 of the total 126 posts left by the Iran International on its social media platforms on that day targted the Iran-China agreement, including 41 negative posts on its twitter page.

Also, BBC Persia has released 61 posts on the three social media platforms during the said 10 days, 34 of them against the strategic agreement between Tehran and Beijing.

Meantime, the Persian service of al-Arabiya news channel which is also funded by the Saudis has tried in the past two weeks to create panic among the Iranian audience through spreading rumors about the agreement and falsifying its contents. It's notable that all these claims about the contents of the agreement came as Tehran has not released the contents of the document officially saying that it first needs to go under negotiations with the Chinese side before it could be released to the public for a final parliament approval.

While, al-Arabiya is an officially known Saudi-run media known for its Arabic edition, the case with the Iran International completely different as it is a Persian-language media aimed directly at the Iranian public opinion inside the country.

Yet, the Iran International's Saudi-serving agenda came more under the spotlight after it disclosed its biased reporting and promotion of Saudi-backed terrorist groups that operate against Iran, specially when it branded a notorious Saudi-backed Arab seperatist group, Al-Ahwazieh, as a popular resistance group and gave a ploy to its leader following a terrorist operation in Iran's South-Western city of Ahvaz in recent years which claimed the lives of many civilians and unarmed military paraders. The media outlet has also never been shy of displaying its strong bonds with the MKO terrorists. In a last case, it aired the full address of MKO leader Maryam Rajavi at the annual meeting of the terrorist group held in Brussels on Friday. The MKO's annual meetings are always participated by the high-ranking Saudi officials. Former Director of the Saudi General Intelligence Directorate (GID) Turki al-Faisal had, for instance, attended the MKO annual gathering in Paris in 2016, where in a gaffe he disclosed the group's top secret information and remembered the terrorist group's ringleader as the "late Rajavi" twice, revealing that Maryam's husband Massoud Rajavi who headed the groups for the past several decades was dead.

On Satuday, Iranian Ambassador to London Hamid Baeedinejad blasted the Saudi-sponsored Iran International for covering the annual meeting of the MKO that has killed 12,000 Iranian citizens and officials in terrorist operation.

The MKO, founded in the 1960s, blended elements of Islamism and Stalinism and participated in the overthrow of the US-backed Shah of Iran in 1979. Ahead of the revolution, the MKO conducted attacks and assassinations against both Iranian and western targets.

The group started assassination of the citizens and officials after the revolution in a bid to take control of the newly-established Islamic Republic. It killed thousands of Iranian people and several of Iran's new leaders in the early years after the revolution, including the then President, Mohammad Ali Rajayee, Prime Minister, Mohammad Javad Bahonar and the Judiciary Chief, Mohammad Hossein Beheshti who were killed in bomb attacks by the MKO members in 1981.