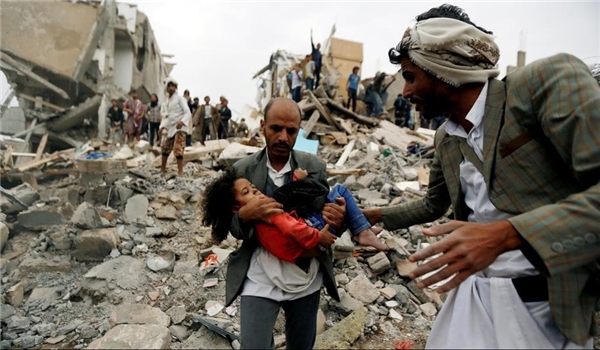 TEHRAN (FNA)- Nearly a dozen civilians, mostly women and children, have been killed when Saudi military aircraft struck a residential area in Yemen’s Northwestern province of Hajjah as the Riyadh regime presses ahead with its bombardment campaign against its Southern neighbor.

Earlier in the day, Saudi-led warplanes conducted three air raids on the Shada'a district and another two on the al-Dhaher district of the Northern Yemeni province of Sa’ada.

There were, however, no immediate reports on possible casualties and the extent of damage caused.

Separately, Saudi jets bombarded Boq district close to the border with the kingdom’s Southern region of Najran, though no reports of casualties and damage were quickly available.

Saudi Arabia and a number of its regional allies launched a devastating war on Yemen in March 2015 in order to bring former Saudi-backed President, Abd Rabbuh Mansur Hadi, back to power and crush Ansarullah movement.

The US-based Armed Conflict Location and Event Data Project (ACLED), a nonprofit conflict-research organization, estimates that the war has claimed more than 100,000 lives over the past five years.

More than half of Yemen’s hospitals and clinics have been destroyed or closed during the war by the Saudi-led coalition, which is supported militarily by the UK, US and other Western nations.