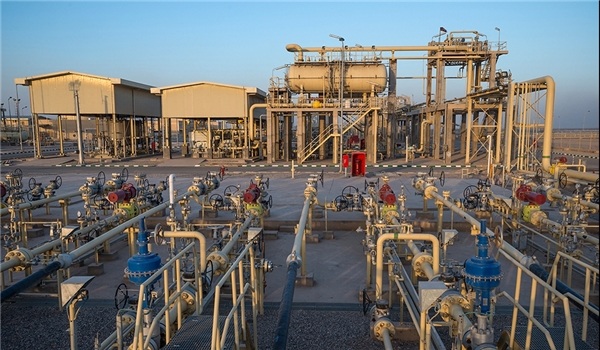 The National Oil Company and Persia Oil and Gas Industry Development Company signed the contract to develop Iran’s share of the joint oilfield with Iraq.

Once the first development phase is over, the field will produce 30,000 bpd of crude oil with a gravity of 16-18.

This contract aims at achieving an extra output of around 39.5 million barrels over the next 10 years with estimated direct and indirect capital costs of $294 million and operating costs of the facility during the contract period of $236 million.

Last month, high-ranking Iranian and Iraqi officials in a meeting in Baghdad conferred on avenues to further broaden cooperation between the two countries in the oil sector.

During the meeting on June 10, Iranian Ambassador to Iraq Iraj Masjedi congratulated new Iraqi Oil Minister Ihsan Abdul Jabbar on his appointment to the post.

The two sides discussed Tehran-Baghdad cooperation in the oil sector.

The Iraqi minister, for his part, appreciated the Iranian ambassador in Baghdad, and welcomed the development of bilateral relations.

Iran and Iraq share an estimated reservoir of 4 billion barrels of oil in Azar Oilfield and Iran in 2019 completed the drilling operation for 7 wells in the field to tap into the shared natural resource, a project manager said.

The National Iranian Drilling Company (NIDC) has completed the operations to drill 7 wells in Azar Oilfield in Anaran block, in the Western province of lIam.

According to supervisor of the project Hossein Rahimi, the operations were carried out in line with the government's push to speed up production from the field, which is shared with its western Arab neighbor, Iraq.

The official added that each well has been drilled within an average of 470 days by domestic experts.

The field is considered as one of the most difficult reservoirs to drill due to the sequence of its low- and high-pressure layers and the large number of tubes for drilling and lining of wells.

Azar holds 2.5 billion barrels of in-place oil, but new reservoir studies on the field suggest a much higher figure of 4 billion barrels. It is one of the six joint fields with Iraq, along with Dehloran, West Paydar, Naft-Shahr, Azadegan and Yadavaran.