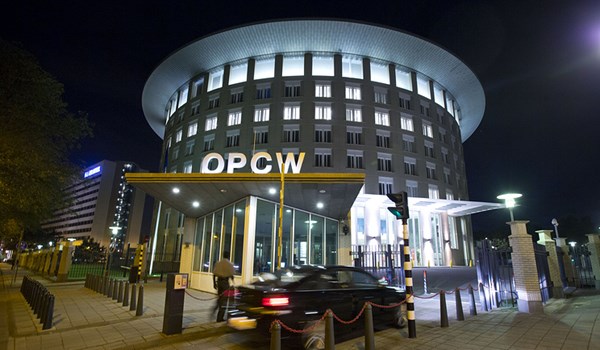 Strange enough, the OPCW has voted to demand Syria confess all details about the alleged attack, and the non-existent facilities used to produce the chemicals.

That’s a non-starter, and probably by design, as Syria, for good reasons, has repeatedly denied being involved in the attacks. There isn’t good evidence to pin them on Syria, either, but the US and the mere extras pushed through a call for OPCW to assign blame that was a foregone conclusion before it even began.

This is a continuation of that probe, as now that they’ve blamed Syria, they can demand a confession. Since Syria never admitted wrongdoing, they’re clearly not going to now, and that’s where the OPCW can talk about punishment.

The OPCW has limited options in that regard, as they could suspend Syria’s voting rights within the body. Beyond that, it’s possible to take the matter to the UN Security Council, but Russia already voted against the OPCW’s measure, and could be expected to veto any UN moves.

While the subject, we all know that the OPCW in a 2013 report did confirm that Syria “completed the functional destruction of critical equipment for all of its declared chemical weapons production facilities and mixing/filling plants, rendering them inoperable.”

We also know that chemical weapons can be delivered with rockets used by terrorists to justify Western intervention and salvage their faltering position in Syria. These terrorists don't need to have access to technology. A rocket can be launched from a simple tube, and the only additional technology they may require for the larger rockets to attack the civilian population and Syrian troops is a truck to mount them on.

Further still, we also know that such attacks need to utilize stabilized chemical weapons and personnel trained in their use. From stockpiles looted in Libya to chemical arms covertly transferred by the US and Israel into Syria, there is no short supply of possible sources for such attacks.

And finally, regarding these murderous US-backed elements lacking the necessary training to handle chemical weapons – US policy has seen to it that not only did they receive the necessary training, but American-Israeli military contractors specializing in chemical warfare are reported to be on the ground with militants inside Syria. Western media news networks reported back in 2012 that “Sources: US helping underwrite Syrian rebel training in Turkey and Jordan on securing chemical weapons.”

In terms of International Law, however, the United States has invaded Syria, a sovereign country and a United Nations member state. The United States, by tacitly joining forces with exporters of radical Wahhabi ideology Saudi Arabia, Israel and the UAE, also used the bogus war on terror to occupy Syria. Now the criminal hordes have begun looking the other way as their goons attack innocent civilians in with chemical weapons. At the same time, they continue to blame Syria and build illegal military bases there, demonize the Syrian government for fighting their terror proxies, call for a wider war on Syria on a “humanitarian” basis, and prolong the disaster that is the Syrian conflict.

This conclusive evidence demonstrates that the widespread suffering of the Syrian people could be averted if only the United States and its client states stopped assisting, training, weaponising (including with chemical weapons) and deploying their instruments of terror into Syria on the pretext of liberation and democracy-building.

The regime changers are free to claim otherwise, but the powerful reality is that by backing these terrorist groups they also condone their chemical attacks, and hence, are complicit in their crimes against humanity. What's more, as maintained by United Nations High Commission for Human Rights, the US-led war on terror - and support for “moderate” rebels - violates UN conventions. The international civil society is outraged by the hypocrisy of the West's supposed respect for human rights while America’s favourite terrorists use chemical weapons to target civilians in Syria.

The US government and associates continue to justify the training and arming of their “moderate” militants in the push for regime change in Damascus. These countries have a long record of supporting terrorists and using false flag operations and tactics to imply the Syrian government for their own chemical attacks against Syrian people. The slogans of humanitarianism merely make them look hypocritical to the rest of the world community at the Organization for the Prohibition of Chemical Weapons