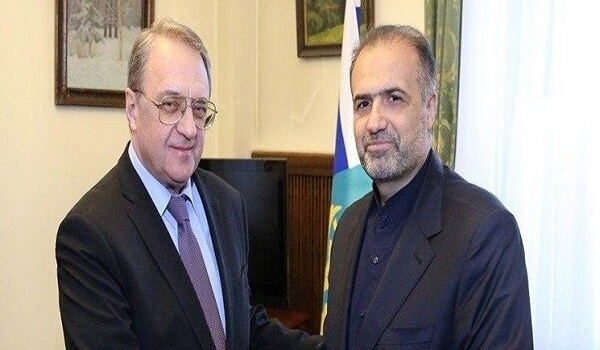 During the meeting in the Russian capital on Thursday, Jalali and Bogdanov, who is also President Vladimir Putin's Special Representative on the Middle East, reviewed developments in Syria, Iraq, Palestine, and Libya.

The two sides also stressed the need for continued consultations and cooperation between the two countries, specially the implementation of their contacts and agreements.

In a relevant development last month, Iranian Foreign Minister Mohammad Javad Zarif in a message to his Russian counterpart Sergei Lavrov called for the expansion of mutual cooperation at different levels.

“Fortunately, in the light of the determination of the leaders and high-ranking officials of the two countries, the bilateral relations have been growing in line with ensuring the common interests and preserving the regional and international stability and security," Zarif said in his congratulatory message to Lavrov on the occasion of Russia’s National Day.

“I hope that such cooperation will continue and deepen in the future,” he added.