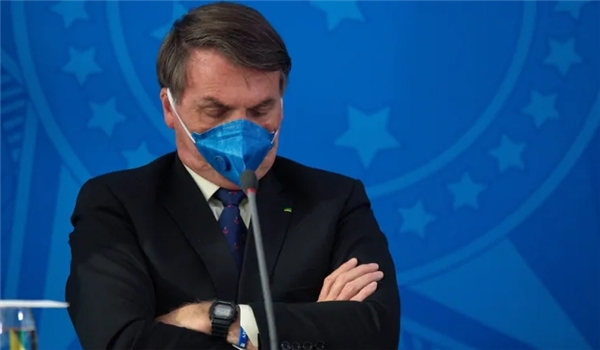 Bolsonaro, a staunch coronavirus skeptic, made headlines on Tuesday, saying his latest COVID-19 test results were positive. He was speaking in front of a hand-picked group of journalists whose microphones turned out to be mere feet away from the infected president, according to RT.

“Despite knowing he was infected with COVID-19, President Jair Bolsonaro continues to act in a criminal manner and endanger the lives of others,” ABI President Paulo Jeronimo de Sousa stated the next day.

He added that Bolsonaro broke “the isolation recommended by the doctors” and put at risk the lives of journalists “he considers being supportive” of his policies.

According to the ABI head, he breached Article 131 of Brazil’s Criminal Code which covers transmitting a serious disease to others or acting in a way that may cause contagion. The clause, carrying a fine or a jail sentence of up to four years, will be used in ABI’s lawsuit against the president, de Sousa noted.

Wearing a simple white mask, Bolsonaro appeared calm as he told reporters on Tuesday that his symptoms weren’t severe and “there’s no reason to fear”. At one point, the president told them to take a few steps back and removed his mask to say some encouraging words.

“Just look at my face. I’m well, fine, thank God,” he said grinning. He then put the mask on again, breaking the common rule of using a face covering only once.

The hardline leader has consistently downplayed the danger of the coronavirus, even after it started sweeping through the country, claiming thousands of lives.

He has been at loggerheads with Brazil’s health authorities, publicly defying social distancing, repeatedly refusing to wear a mask, and insisting that lockdowns don’t do anything but harm the economy.

Brazil quickly became South America’s worst-hit coronavirus hotspot in previous weeks, trailing only behind the US in worldwide COVID-19 cases. It has over 1.6 million active cases and close to 67,000 fatalities.