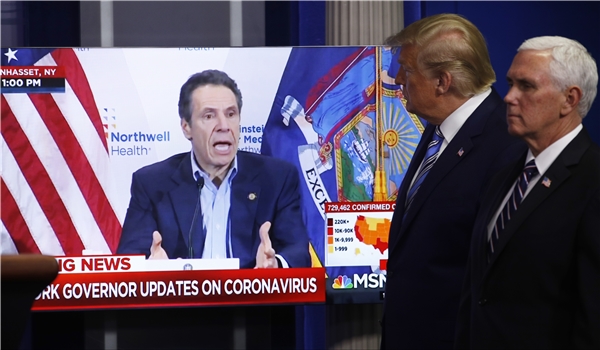 Forty-three percent of respondents approve of Trump's handling of the virus pandemic, while 55 percent disapprove.

That's compared to 60 percent of Americans who say they approve of how their governors are handling the response and just 37 percent who said they disapprove.

Even among Republicans, just over half — 53 percent — say they trust the president's judgment on reopening over that of their governors.

The data come from the first installment of a weekly online tracking poll on social and economic issues that will be released over the coming months.

More than 2.99 million cases of COVID-19 and more than 131,000 deaths in the US have been attributed to the virus, according to NBC News' analysis.

As case counts and deaths have continued rising since the spring, the American president has downplayed the surge, blaming it on increased testing. While Trump has been slow to publicly support mask-wearing and other social distancing techniques, his hope that the virus will "disappear" isn't in line with Americans' fears of a second wave.

Seventy-nine percent of Americans said they were either "very" or "somewhat" worried about a second wave — 62 percent of Republicans reported being worried, and an overwhelming 83 percent of Democrats said the same.

However, the president's overall job rating has remained consistent throughout the pandemic. Trump's overall job approval stands at 43 percent, in line with various polls taken since March.

As states have begun to reopen businesses in recent months — moves that have been frustrated by the rising case counts — Trump has sought to promote the country's reopening and frame a return to normal as an economic imperative.

While group gathering restrictions have relaxed in most states, just 27 percent of Americans reported having left their homes to visit with friends or family in the day before taking the survey.