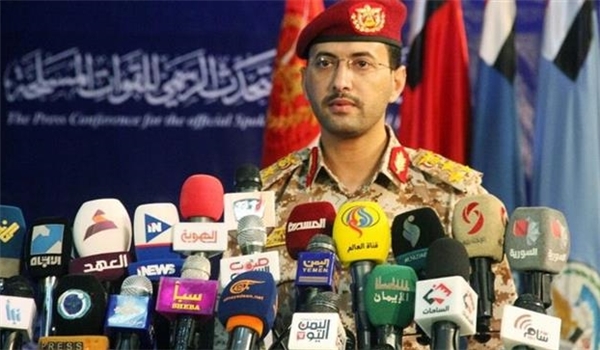 TEHRAN (FNA)- The spokesman for Yemeni army censured the US as the conspirator of the Saudi-led military onslaught on his country, saying Washington arms the Riyadh regime and its regional allies, defines goals for them and is involved in a political cover-up for their acts of aggression.

“Over the past few days, Yemeni armed forces have discovered large quantities of US-built munitions at the positions of Saudi mercenaries [loyal to the ex-Yemeni government] while conducting clean-up operations in the provinces of Ma’rib and al-Bayda,” Brigadier General Yahya Saree said at a press conference broadcast live from the capital Sana’a on Tuesday afternoon, presstv reported.

“The weapons had the logo of the so-called United States Agency for International Development (USAID) on,” said the Yemeni military official, adding that USAID supports and funds organizations in Yemen to collect classified information under the guise of humanitarian activities.

Saree held Washington fully responsible for the Saudi-led war on Yemen, stating that US authorities arm Saudi Arabia and its allies, set goals for them and politically support them in their offensive.

The senior Yemeni military official called on the country’s Supreme Council for the Administration and Coordination of Humanitarian Affairs and International Cooperation to expose USAID’s affiliation to the US State Department, and the fact that the agency has been actively collaborating with the Saudi-led coalition in the massacre of Yemenis under the pretext of humanitarian aid.

“Our people are being killed by US-made weapons. Our people are going through ordeals because the United States of America supports its tools in the region: the Saudi and the United Arab Emirates (UAE) regimes, and pushes them to implement its agenda and policies, and to serve the interests of the Zionist regime [Israel] in the region,” Saree pointed out.

The spokesperson criticized Yemeni authorities for allowing US and international organizations to operate in the impoverished Arab country, emphasizing that some of these agencies are actually helping the enemies in terms of intelligence collection.

Separately, Yemeni Interior Ministry Spokesman Brigadier General Abdul Khaleq al-Ajri said in a press release on Monday that narcotic drugs are being brought into Yemen with the assistance of aggressor states.

“The forces of aggression are linked to drug traffickers in Yemen. There is not much difference between such people and Saudi mercenaries,” Ajri noted.

Saudi Arabia and a number of its regional allies launched a devastating war on Yemen in March 2015 in order to bring for Riyadh-friendly President Abd Rabbuh Mansur Hadi back to power.

The US-based Armed Conflict Location and Event Data Project (ACLED), a nonprofit conflict-research organization, estimates that the war has claimed more than 100,000 lives over the past five years.

More than half of Yemen’s hospitals and clinics have been destroyed or closed during the war by the Saudi-led coalition, which is supported militarily by the UK, US and other Western nations.