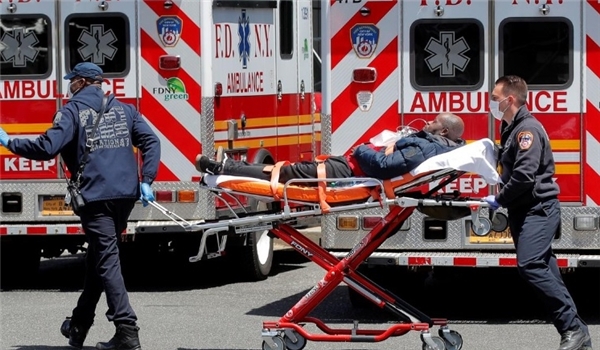 TEHRAN (FNA)- President Donald Trump’s approval rating took a considerable hit amid the coronavirus pandemic, as new research revealed possible connections between the president's plunge in support and a spike in the number of new cases nationwide.

The American president’s approval dropped the fastest in 500 counties suffering from 28 deaths resulting from COVID-19 per 100,000 people, according to the latest data from Pew Research Centre, The Independent reported.

By late June, his support fell 17 percent among voters who previously said in March they approved of the president — just as the COVID-19 outbreak was declared a national emergency and global pandemic.

According to Pew Research Centre, the dip in support transcended party lines and voting blocs, with an almost-equal split among Democrats and Republicans. Men and women, as well as college graduates and non-graduates, were also reportedly unified in their newfound disapproval of the president — particularly in counties facing a rise in coronavirus infections.

The data showed Trump trailing former Vice President Joe Biden, the presumptive Democratic nominee, in key battleground states like Michigan, Wisconsin and Pennsylvania — all of which helped the president secure victory in 2016 — where he was losing critical support among voters aged 65 and over.

He also appeared to be struggling in states like Arizona, North Carolina and Florida, where a majority of senior voters said they disapproved of the president’s response to the coronavirus pandemic in the US.

Trump has meanwhile continued to downplay the pandemic, only acknowledging just last week that he may, in fact, wear a mask amid mounting criticism over his numerous appearances in public in which the president does not wear any face coverings.

Vice President Mike Pence has begun wearing a mask during public outings, though he has also attacked the media for “fear-mongering” over the virus in a recent Op-Ed published in The Wall Street Journal.

The outbreak appeared to be spreading from largely urban hotspots to more rural parts of the country, as hospitals nationwide warned they may soon reach capacity and lack critical supplies, as New York and other states similarly endured at the start of the pandemic.