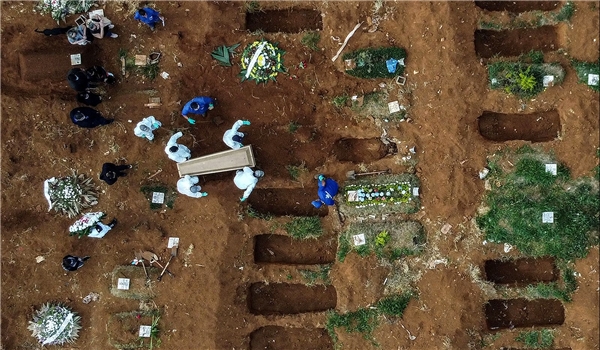 TEHRAN (FNA)- It shouldn’t “be a surprise” if the global death toll from the coronavirus begins to pick up pace again as the pandemic shows signs of accelerating across the globe, World Health Organization officials stated on Tuesday.

For the month of June, reported COVID-19 cases around the world have accelerated while the death toll has been falling, Dr. Mike Ryan, executive director of the WHO’s emergencies program, said at a news conference at the agency’s Geneva headquarters, CNBC reported.

However, WHO officials warn that there’s a lag between rising cases and increasing deaths. It takes weeks after contracting the virus to fall seriously ill and potentially die from the coronavirus.

“Some of this may be lag, we may see deaths start to climb again because we’ve only really experienced this rapid increase in cases over the last five to six weeks,” Ryan noted, adding, “I don’t think it should be a surprise if the deaths start to rise again. It will be very unfortunate, but it may happen.”

The pandemic has shown signs of accelerating as thousands of additional cases are reported each day. Latin America “doesn’t look good” and the WHO is “concerned” about North America, minus Canada, Ryan warned.

The coronavirus has killed more than 544,400 people across the globe and at least 131,500 in the US, according to Johns Hopkins University data.

He added, however, that there have been advancements in caring for coronavirus patients, which has allowed for those most at risk to receive treatment quickly.

Some drugs, like dexamethasone, have been effective when treating those who are seriously ill and as testing increases, the number of fatalities has become a smaller proportion compared with cases.

WHO Director-General Tedros Adhanom Ghebreyesus said that while global deaths have shown signs of leveling off, it doesn’t mean “it’s been a success”.

“The leveling of the number of deaths globally is because of some countries [have contained the virus], but in many countries it’s on the rise,” Tedros added.

There are many differences between countries and their reported death count and it can be difficult to compare them, said Dr. Maria Van Kerkhove, head of the WHO’s emerging diseases and zoonosis unit.

In some countries, the increase in deaths from the coronavirus could be related to outbreaks in places with vulnerable populations that tend to suffer higher fatality rates, such as nursing homes, she noted. Other countries will also have to revise their death counts moving forward as more deaths are later attributed to COVID-19.

“It will take us some time to really understand mortality but, having said that, there are many things we can do now to prevent infections and by preventing infections we are ultimately preventing the opportunity for someone to advance to serious disease and death,” Kerkhove added.