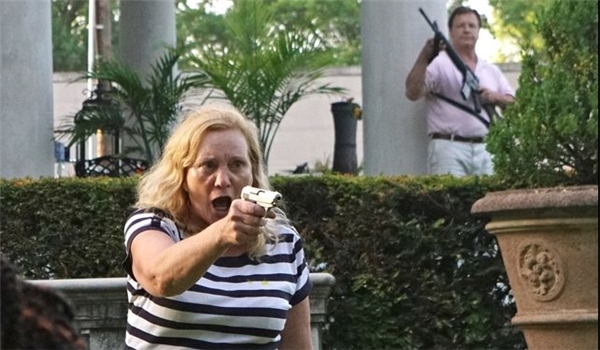 TEHRAN (FNA)- US President Trump on Monday shared a video on Twitter of a white couple pointing firearms at a group of protesters in St. Louis who were marching to the mayor's residence to demand her resignation.

The 30-second clip, which was posted on Twitter by ABC News, showed a man and woman holding weapons as a number of demonstrators walked by about 20 yards away. The couple was standing outside their home in the upscale Central West End neighborhood of St. Louis, according to The Guardian.

The footage shows a man yelling and pointing a rifle at the protesters, many of whom were recording the scene on their cellphones. A chant of "let's go" could be heard in the background as a number of protesters walked past the couple's home.

The incident in St. Louis came amid continued unrest across the US as protests over racial injustice and police brutality have swept the nation following the May 25 police killing of George Floyd in Minneapolis.

Trump shared the video just one day after he faced backlash for retweeting a clip in which a supporter shouted "white power" amid confrontations between anti-Trump protesters and pro-Trump demonstrators. In the tweet, which Trump later deleted, the president praised the "great people" voicing support for him.

Just hours after posting that video, Sen. Tim Scott (R-S.C.), the only Black Republican in the upper chamber, called on Trump to take it down, calling it "indefensible".

“There's no question he should not have retweeted it, and he should just take it down,” Scott, who is leading the GOP’s police reform effort, said.

“We’re in a battle for the soul of the nation — and the President has picked a side,” presumptive Democratic presidential nominee Joe Biden said on Twitter, adding, “But make no mistake: it’s a battle we will win.”

White House Spokesman Judd Deere said in a statement Sunday that the president "did not hear the one statement made" in the "white power" video.

"What he did see was tremendous enthusiasm from his many supporters," he said.

The march in St. Louis on Sunday was held just days after the city's mayor, Lyda Krewson (D), read the names and addresses of several individuals who wrote to her office suggesting that the police department in the city be defunded. Krewson has since apologized and a video of her comments has been removed from Facebook, The Guardian noted.

A group of about 500 demonstrators marched to her home demanding that she resign over the move. As they passed a house on the 0 Block of Portland Place, a couple came out of their home brandishing firearms and shouting that the protestors were trespassing.

The couple was identified as Mark T. and Patricia N. McCloskey by The St. Louis-Dispatch on Monday. Mark McCloskey repeatedly shouted “private property” and “get out” at the protestors walking by, the newspaper reported. Some protestors could be heard urging others to “keep moving” as the couple kept weapons pointed in their direction.

The St. Louis Metropolitan Police Department told The Hill that it is investigating the incident.

An incident summary said that the couple, identified as a 63-year-old white male and 61-year-old white female, called the police after a group of people allegedly trespassed on a private street. The couple claimed that they armed themselves after seeing other individuals armed, police said.

Trump has faced criticism over how he’s used social media in the weeks since Floyd’s death. Twitter in May placed a warning on a tweet from the president that said “when the looting starts, the shooting starts."

Trump made the comments while claiming "thugs" in Minneapolis were "dishonoring the memory of George Floyd".

Trump has also repeatedly denounced protesters who have toppled statues of Confederate generals and other figures. In tweets, he’s described those targeting monuments as “arsonists, anarchists, looters, and agitators”.

TEHRAN (FNA)- China is ready to join the disarmament talks with the United States and Russia if Washington agrees to reduce its nuclear arsenal to the Chinese level, Director-General of the Chinese Foreign Ministry's Arms Control Department Fu Cong said.

TEHRAN (FNA)- Iranian envoy to Baghdad Iraj Msjedi said major steps have been taken to lift visa requirements between Iran and Iraq, and added that the two nations will always remain with each other.