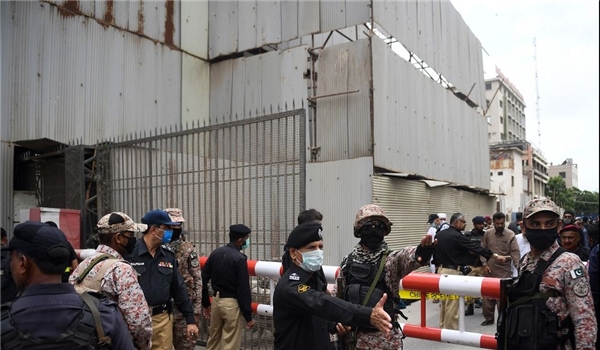 TEHRAN (FNA)- The Iranian foreign ministry on Tuesday deplored the terrorist attack against Pakistan Stock Exchange Market building in Karachi, stressing the need for collective efforts to fight against terrorism.

He described cooperation and synergy among all the world states, specially the regional countries, as the only way for a serious fight against the root causes of the big problem of terrorism.

Four heavily armed terrorists attacked the busy Pakistan Stock Exchange building in Karachi with guns and grenades on Monday morning, killing four security guards and a police officer before being shot dead in an exchange of fire, Pakistani authorities had said.

The terrorists, who arrived in a car, opened indiscriminate fire and threw hand grenades at the main entry of the multi-storey building situated in the city's high security commercial hub in an attempt to storm it.

TEHRAN (FNA)- Death rates among immigrants from sub-Saharan Africa doubled in France and tripled in the Paris region at the height of France’s coronavirus outbreak, finds a study from the French government’s statistics agency.

TEHRAN (FNA)- Israel's public health director quit Tuesday amid a spike in new coronavirus cases, saying it had reopened the economy too rapidly and had lost its way in dealing with the pandemic.

TEHRAN (FNA)- The colder temperatures coming in winter will lead to an increase in the spread of COVID-19, scientists have confirmed.

TEHRAN (FNA)- The number of people who have died from coronavirus infection in France rose by 13 to 29,933, but that figure takes into account a downward revision of fatalities in nursing homes.

TEHRAN (FNA)- Impressive new work has demonstrated a potential way to restore vision in those suffering from degenerative diseases of the retina. A single injection of nanoparticles was found to create a working artificial retina, restoring vision to blind rats.

TEHRAN (FNA)- The COVID-19 outbreak in Spain’s Northeastern region of Lleida became increasingly worrying on Tuesday, as local authorities set up a makeshift hospital and called on volunteer doctors to help out in the area.

TEHRAN (FNA)- The UK coronavirus death toll has increased by 155 in a large rise from Monday's low of just 16, the latest official figures released Tuesday show.

TEHRAN (FNA)- Italy's national serological testing plan is faced with a challenge as too few Italians are taking the test for coronavirus antibodies for the results to be valid, officials said.

Trump Breaks with Fauci, Says US in 'Good Place' in Fight Against Virus

TEHRAN (FNA)- President Donald Trump broke with top infectious disease expert Anthony Fauci on Tuesday by saying the US is in a “good place” in its fight against the coronavirus pandemic.

TEHRAN (FNA)- The United States recorded a one-day total of 60,200 new coronavirus cases, according to the count kept by Johns Hopkins University - a new all-time high which brings the total number of patients in the worst virus-hit country to 3 million.

TEHRAN (FNA)- The administration of President Donald Trump has submitted to the UN Secretary-General its notice to withdraw from the World Health Organization (WHO) by July 6, 2021, a senior administration official confirmed to CNBC.

Air Filter Can ‘Catch, Kill’ Coronavirus Instantly after Heating it to 392 Degrees, 99.8 Percent of Virus Was Terminated in Tests

TEHRAN (FNA)- An air filter could help fight the coronavirus pandemic by catching and killing the virus instantly.

TEHRAN (FNA)- Body camera footage captured a Florida police officer with his knee on a man's neck after a traffic stop. Officers from the Orlando Police Department had initiated the stop as a a woman, Janet Feliciano, pulled into her driveway on West South Street in the neighborhood of Parramore in July last year. [VIDEO]
﻿
﻿
Sections