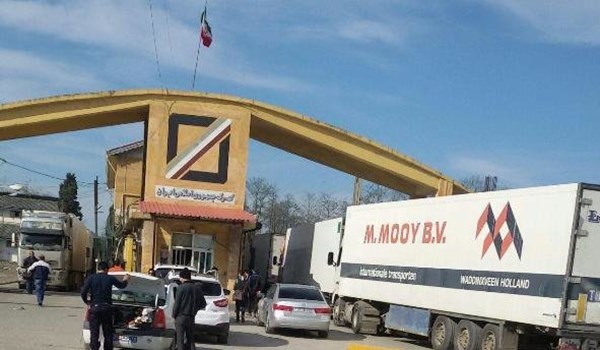 TEHRAN (FNA)- Director General of Kordestan Province's Customs Department Bakhtiyar Rahmanipour announced that some 220,000 tons of goods valued at over $58 million were exported from Iran’s Western province of Kordestan during the first three months of the current Iranian year (March 20, 2020- June 21, 2020).

He noted that over 57,000 cargo trucks exited Kordestan’s border crossings and 13,137 vehicles entered the country in a three-month period.

The trades between the Iranian province and Iraq were halted for over three months due to the coronavirus outbreak.

In a relevant development in early June, Bashmagh border market – the only transit route between Kordestan province and Iraq – resumed working after a nearly 100-day hiatus.

Iranian and Iraqi delegations had earlier convened in the western Iranian city of Marivan and decided to reopen the border market while observing health protocols.

The trucks have to pass through sanitizing tunnels at both sides of the border. While Iran is providing free services, the Iraqi Kurdistan region is charging the trucks upon entering the region, Iranian Kurdistan province deputy governor-general Khaled Jafari said.

China Defends WHO, Lashes Out at US Move to Withdraw

WHO Worried About Rapidly Spreading Coronavirus Outbreaks in Americas

TEHRAN (FNA)- The Iranian health ministry announced on Wednesday that 2,691 new coronavirus cases have been identified in the country during the past 24 hours, adding that 153 patients have passed away since yesterday.