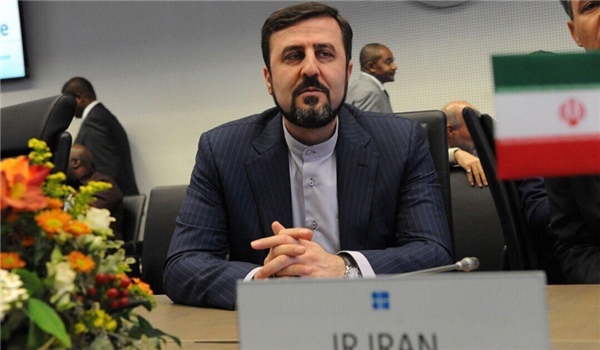 TEHRAN (FNA)- Iranian Ambassador and Permanent Representative to Vienna-Based International Organization Kazzem Qaribabadi reaffirmed Tehran’s principled position for complete obliteration of nuclear weapons, and expressed deep concern over violation of the Comprehensive Nuclear-Test-Ban Treaty (CTBT) by France and the US.

Addressing the 54th Session of the Preparatory Commission for the Comprehensive Nuclear-Test-Ban Treaty Organization (CTBTO) in Vienna on Thursday, Qaribabadi stressed once again Iran’s long-standing and principled position on the urgent need for the full elimination of nuclear weapons, and added, “France’s recent test of a missile, which is capable of carrying multiple nuclear warheads, and nuclear test explosions proposed by the US, are in serious breach of international nuclear nonproliferation treaties.”

He noted that unfortunately, after more than two decades since the approval of the treaty, achieving its main goal to terminate nuclear weapons’ development has become more out of reach.

Iran’s envoy underlined that the modernization and testing of nuclear weapons threaten NPT as well as the global peace and security.

The unilateral and illegal withdrawal from many international agreements, such as the Open Skies Treaty, the Nuclear Non-Proliferation Treaty, and the Intermediate-Range Nuclear Forces Treaty and JCPOA has become normal for the US that is not only against multilateralism but also damages international peace and security, he said.

He also expressed concern over US Senate approval of a $10 million budget for such a nuclear test, calling on the US and France to live up to their commitments to comply with protecting the objectives of disarmament treaties.

in relvant remarks last week, Iran voiced concern over France’s recent test-firing of an intercontinental nuclear-capable ballistic missile, and said that the move is in clear violation of the Non-Proliferation Treaty (NPT) and incompatible with Paris’s obligations vis-à-vis nuclear disarmament.

Iran expresses its concern over the move and believes that the French government must not ignore its international commitments stressed in Article 6 of the NPT and the NPT Review Conferences, Iranian Foreign Ministry Spokesman Seyed Abbas Mousavi said on Saturday.

He added that France must fully live up to its international obligations regarding nuclear disarmament.