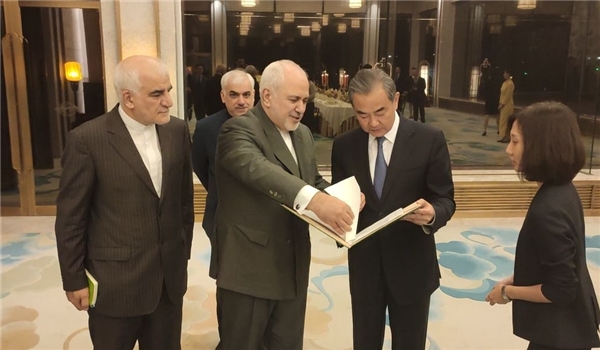 During the conversation on Wednesday, Zarif referred to strategical ties between the two sides, and expressed the hope that Iran-China comprehensive cooperation document would be signed in the near future.

The Iranian minister called for the allocation of specific facilities to both countries' tradesmen under the Covid-19 outbreak.

He condemned the interference of the US and some western countries in China's internal affairs, calling the attitude a big threat to international stability.

During the talks, the two top diplomats discussed various issues, including US unilateral behavior, mutual cooperation, and Iran nuclear deal known as the JCPOA.

Zarif lauded China's fight against the coronavirus and said Iran-China cooperation on the issue was a good opportunity for proving sympathy towards each other.

He expressed gratitude for the help of the Chinese government and nation for Iran during the pandemic.

Wang Yi reiterated China's support for the JCPOA and referring his recent letter to UNSC and UN General Secretary said, "China agrees with no change in the JCPOA articles and UN Resolution 2231."

"The US' withdrawal from the JCPOA has left no rights for it to make and changes in the agreement's mechanisms."

Both sides underscored the significance of multilateralism among world countries and support for international rights against the US' unilateralist approach.

Writing on his twitter page on Wednesday, Zarif had informed of his video conference with Wang Yi.

"On the threshold of the Chinese Dragon Boat Festival, I am very delighted that I had a video meeting with Chinese Foreign Minister Wang Yi. We agreed on deepening all-out strategic ties between the two countries, enhancement of the 25-year mutual cooperation plan and strengthening mutual support in the international affairs," Zarif wrote in Chinese on his twitter page.