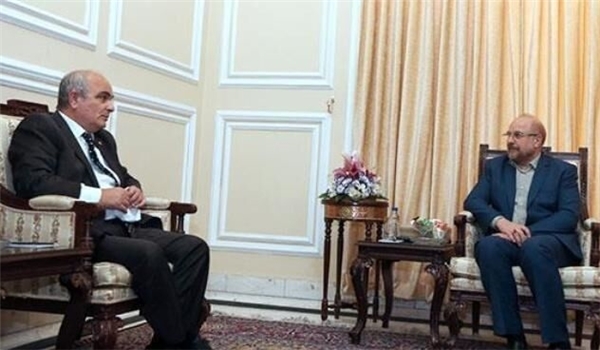 During the meeting in the Iranian capital on Monday, Qalibaf and Dzhagaryan explored avenues for bolstering and reinvigorating bilateral fields in economic and trade areas.

During the meeting, Qalibaf appreciated Russia for its principled stance in the Board of Governors of the International Atomic Energy Agency (IAEA).

"The claims made in IAEA resolution are not legal and Russia had firm stance in this regard," he said.

The Iranian parliament speaker said undoubtedly parliamentary cooperation between the Russian State Duma and the Iranian Parliament will continue with more speed and precision.

Elsewhere in his remarks, Qalibaf referred to the importance of focusing on the situation in Syria, and said solving the Syrian issue has merely a political solution and holding a virtual or in person trilateral meeting by Iran, Russia and Turkey will be effective.

He underlined the importance of holding future joint commission meetings of the Iranian Parliament and State Duma and following up on the economic issues.

Dzhagaryan, for his part, congratulated Qalibaf on his election as new parliament speaker.

He added that the Iranian and Russian parliaments play a major role in developing bilateral ties.

Dzhagaryan noted that claims in the IAEA Board of Governors are illegal, saying Russia and China will continue supporting Iran.

Tehran and Moscow have in recent years made efforts to further increase their economic and trade cooperation to confront the US sanctions against both nations.

In June 2019, Iranian and Russian officials, businessmen, and economic activists started two 3-day economic events in the Iranian cities of Tehran and Isfahan in a bid to discuss avenues for bolstering economic relations.

The 15th Iran-Russia Joint Economic Cooperation Commission and 2nd Iran-North Caucasian Region Business Forum will be held for a period of three days in Tehran and Isfahan provinces from today in the presence of senior public and private sectors officials of the two countries.

The opening ceremony of the 2nd Trade, Historical, Cultural and Scientific Forum between Iran and North Caucasus Region was held in Tehran on June 17 in the presence of Minister of Energy Reza Ardakanian.

On the sidelines of 15th summit of Iran-Russia Joint Economic Commission, a number of nine Working Groups and three specialized committees were held in the presence of a great number of public an d private sectors of the two countries in the fields of industry, energy, transport and ICT (information and communication technology).