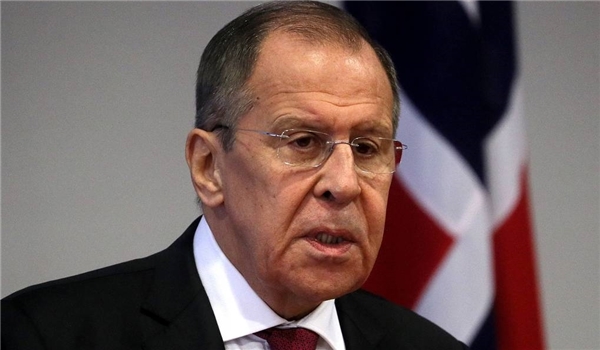 TEHRAN (FNA)- Russian Foreign Minister Sergei Lavrov undermined the US attempts to extend arms embargos against Iran, and said Tehran and Moscow are determined to preserve the nuclear deal.

Lavrov told reporters in Moscow on Tuesday that despite US destructive stance, Iran and Russia underline the importance of preserving the JCPOA.

He said that the JCPOA and the UNSCR 2231 which verified the deal have in fact one single objective.

But the US which quit the JCPOA created obstacles for implementing the international agreement by other parties, Lavrov said.

This is while, the US is trying to extend arms embargo with the claim of participating in the nuclear deal, he noted.

We will try to implement international regulations, Lavrov reiterated.

Iranian and Russian foreign ministers on Tuesday signed a joint declaration on enhancement of the international laws, rejecting conceptions which attempt to weaken the global order based on international laws.

"The Islamic Republic of Iran and the Russian Federation stress the necessity for the governments' avoidance from threats or resorting to force against the territorial integrity or political independence of any other country against the UN Charter. Therefore, they condemn the unilateral military intervention," part of the 14-paragraph declaration signed by Mohammad Javad Zarif and Sergey Lavrov said.

It added that the two countries also support non-interference of foreign states in the internal affairs of countries with the aim of changing their legitimate government.

"The Islamic Republic of Iran and the Russian Federation consider any measure or effort to weaken or destabilize the governments or their institutions in any forms or any pretext as violation of the aforesaid principle," the declaration said.

Upon his arrival at Moscow airport on Tuesday, Zarif said that Iran and Russia have strategic ties and the two neighboring countries need consultations to tackle the critical situation in the global arena.

He noted that Iran and Russia have been cooperating on the Syrian issue.