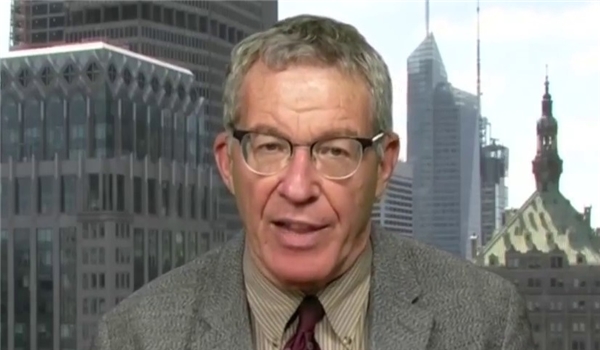 TEHRAN (FNA)- Daniel Lazare, American author and journalist, says the US is afraid to wage a full-scale war on Iran, but it deprives Iran of crucial medications and health supplies amidst coronavirus outbreak as a form of biological warfare.

In an exclusive interview with FNA, Daniel Lazare said, “[Iran] needs pharmaceuticals, medical equipment, protective gear, etc. Yet such items are all but unobtainable thanks to US-imposed sanctions. For Iran, it is a matter of life and death. Yet such factors do not enter into the US imperial calculus… The idea that the Trump Administration distinguishes between the government and the people is absurd since its policies are plainly aimed at destroying both.”

Daniel Lazare has written for The Nation, Le Monde Diplomatique, Global Research, Jacobin and Consortium news. He writes on West Asia, terrorism, Eastern Europe; but he is best known as a critic of the US Constitution and American politics, government, and social policy in general.

Q: The international banks do not transfer money from the US-sanctioned countries, like Iran, to buy medications and health supplies, such as ICU equipment. Does that make the US sanctions criminal?

A: It certainly does. Remember -- the US imposed economic sanctions after unilaterally withdrawing from 2015 JCPOA. Somehow, it then decided that this gave it the authority to punish Iran for the "crime" of faithfully abiding by the terms of the agreement. Iran has paid an enormous price thanks to such topsy-turvy logic. Oil exports have fallen to near zero while the country has been deprived of vital imports. But the problem is compounded now that Iran has emerged as a major epicenter for the Covid-19 crisis.  It needs pharmaceuticals, medical equipment, protective gear, etc. Yet such items are all but unobtainable thanks to US-imposed sanctions. For Iran, it is a matter of life and death. Yet such factors do not enter into the US imperial calculus.

But such policies are short-sighted in the extreme. Not only do they hurt Iran, they also hurt the US. As cases mount in one country, it is inevitable that they will flow over the border into others. Hence, US allies like Iraq, Saudi Arabia, and the other [Persian] gulf states are directly in the line of fire, as are locally-stationed US troops. They in turn will infect others when they rotate home. The virus will thus spread all the more fiercely. It is a clear case of shooting oneself in the foot.

Q: Not only the health, but also the economies of the sanctioned countries are at risk. How do you find the US Administration claim that they back the people of Iran, at the same time they keep the anti-Iran sanctions in place during the pandemic?

A: US claims to side with the people of Iran against their own government. But the claim is obviously specious and dishonest. The proof is in the twelve demands that Secretary of State Mike Pompeo issued in May 2018. Not only are the demands illogical and at odd with the facts -- they call on Iran to "cease harboring senior al-Qaeda leaders," for example, something it has never done -- but they amount to a requirement that Iran essentially give up the last shred of national sovereignty so that Israel and Saudis can exercise free reign throughout the Middle East. Since this is something the Iranian nation obviously cannot do, it is a formula for endless punishment and isolation.

Indeed, it is hard to imagine what Iran could do to meet US demands. Just about the only thing I can think of would be to bring back the Shah, which is to say an outright US instrument whose function would be to return the country to some sort of neo-colonial status. The results would be disastrous for religious minorities attempting to resist Zionist or Wahhabist oppression. If Iran continues to resist, it is because America effectively gives it no choice.

Q: Do you believe the pandemic would make the US Administration reshape its policy against Iran?

A: I think Trump is afraid to go to war with Iran. Americans are tired of endless wars in the Middle East, a part of the world they do not understand and know little about. Hence, a military confrontation would generate immense opposition back home, particularly among core Trump supporters in places like the South and Midwest. These are people who believed him when he promised to stop engaging in pointless military adventures. Hence, they would be furious if he were to go back on his word.

Hence, it is something he will try his best to avoid. This is not to say that Trump will not stumble into a war inadvertently. To the contrary, the risk is ever-present thanks to the sheer recklessness of US behavior. But for the moment he will try to accomplish his goals short of outright by isolating Iran economically and now subjecting it to a form of biological warfare by depriving it of crucial supplies needed to battle the coronavirus epidemic. As I said, the idea that the Trump Administration distinguishes between the government and the people is absurd since its policies are plainly aimed at destroying both.

TEHRAN (FNA)- Body camera footage captured a Florida police officer with his knee on a man's neck after a traffic stop. Officers from the Orlando Police Department had initiated the stop as a a woman, Janet Feliciano, pulled into her driveway on West South Street in the neighborhood of Parramore in July last year. [VIDEO]

TEHRAN (FNA)- Large flocks of migratory flamingos in Lake Urmia, Northwest Iran. Recent downpours causing floods, that recently left many provinces of Iran submerged, have made the world’s second largest saltwater lake come back to life, as the water level of the Northwestern Lake Urmia has raised dramatically. [PHOTOS]

TEHRAN (FNA)- Several thousand young people and students gathered in Central Brussels to protest against a recent court ruling that held that bans on headscarves in higher education were lawful. [VIDEO]

TEHRAN (FNA)- Agricultural land to the Southeast of Gaza City was damaged on Sunday evening, after Israeli air strikes targeted the region. [VIDEO]

TEHRAN (FNA)- Palestinian protesters burn effigies of US President Donald Trump, Trump's Middle East peace plan dubbed as the "Deal of the Century", and Israeli Prime Minister Benjamin Netanyahu, during a demonstration against Israel's plans to annex parts of the occupied West Bank, in Rafah in the Southern Gaza Strip. [PHOTOS]

Life in Age of Coronavirus

TEHRAN (FNA)- People around the world adapt to a new normal of staying at home, social distancing and masks during the coronavirus pandemic. [PHOTOS]

US: Several Arrested as National Guard Deployed in Portland

TEHRAN (FNA)- Several arrests were made in Portland as protests continued in the wake of George Floyd's killing. [VIDEO]

TEHRAN (FNA)- Palestinian women demonstrate against Israel’s West Bank annexation plans near the Erez crossing in the Northern Gaza Strip. A controversial peace plan unveiled by Trump in January promised US backing for Israel to annex swathes of the West Bank, including Jewish settlements considered illegal under international law. [VIDEO]

TEHRAN (FNA)- Rescuers are racing against time to save people stranded by heavy floods and landslides that have devastated Southwestern Japan and left dozens dead. [PHOTOS]

US Navy a Source of Instability in South China Sea

TEHRAN (FNA)- China has every right to accuse the United States of having “ulterior motives” after Washington ran its largest military exercise in the South China Sea in years over the weekend.

TEHRAN (FNA)- The secretariat of the 16th Int'l Resistance Film Festival in Iran announced on Tuesday that it will hold the event in September and November 2020.

UK: Hundreds of Royal Staff 'Being Axed with Up to 250 Offered Voluntary Redundancy' After Coronavirus Hits Tourism Income

TEHRAN (FNA)- Up to 250 royal staff could lose their jobs this month as the Queen's finances continue to feel the impact of coronavirus crisis, it has been reported.

UK Jobless Rate 'Could Near 15% in Second Coronavirus Wave'

TEHRAN (FNA)- The number of unemployed people in Britain could soar to almost 15% of the working population if the country experiences a second wave of the coronavirus pandemic, the Organisation for Economic Cooperation and Development (OECD) said.
﻿
﻿
Sections