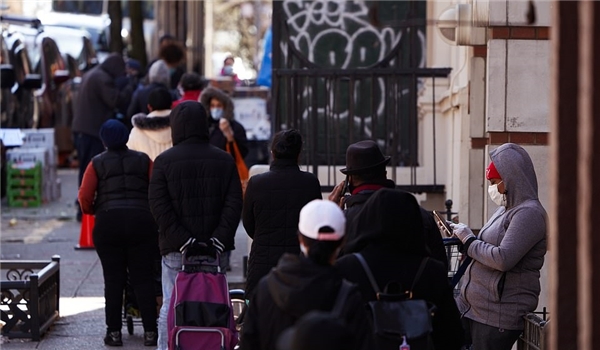 TEHRAN (FNA)- Millions more of Americans are resorting to food banks for emergency supplies since the coronavirus pandemic triggered widespread layoffs in addition to 40 million others who were already sleeping hungry even before the outbreak, but the White House avoids shifting a small share of the military budget to the hungry Americans.

The demand for food aid has increased as much as eightfold in many places, according to recent reports from the media and the United Nations which give a nationwide snapshot of the hunger crisis facing the US as millions become unemployed.

The national guard has been deployed to help food banks cope with rising demand in many cities amid growing concerns that supplies may run low as the crisis evolves. Overstretched food pantries are switching to drive-thrus and home deliveries to minimize the spread of Covid-19 as almost 300 million Americans are urged to stay at home.

Last year, 4.3 billion meals were distributed to more than 40 million Americans through a network of 200 food banks and 60,000 pantries, schools, soup kitchens and shelters, according to Feeding America, the national food bank network. The working poor, elderly and disabled and infirm accounted for the vast majority of food bank users.

The images of thousands of cars, lined up bumper-to-bumper on otherwise-empty freeways, capture the shocking scale of the nation’s hunger crisis. The demand at food banks across the country has skyrocketed in recent weeks underscoring just how expansive the effects of the economic downturn have been:

As of early May, more than 35 million people had filed for unemployment in just six weeks. That means growing food insecurity in a nation where millions of people were already struggling to get sufficient food each month.

Even before the crisis, the amount the government was providing to individuals and families receiving benefits was often not enough to cover a month’s worth of groceries. This shortage is by design: the help is intended to be “supplemental” in nature. Because of this, however, many people have had to turn to food banks to make up the difference. According to a new study from the USDA, almost a third of recipient families visited a food bank every month. Currently, even more must do so.

Experts say state benefits overall have not kept pace with increased living costs either — and that this gap is even more evident during the pandemic, when individuals are relying on food banks more and people are being told to stockpile groceries for longer periods.

Food banks are completely slammed right now because state support isn’t accessible to all households affected by the economic downturn — and doesn’t provide enough money even for those who can use it — food banks are now trying to fill in a much bigger gap than they usually have to deal with. As millions of people grapple with unemployment and business closures, they’re using food banks in order to address shortfalls.

There are several proposals in Congress aimed at improving the existing food aid program — by making it more comprehensive and flexible. This is while allocating just a fraction of US military budget per year could end hunger in the US.

With the world spending roughly $2 trillion per year on militarism (roughly half of it by the United States), it can also be concluded that 1.5% of global military spending could end starvation on earth.

This will likely face a roadblock from warmongers in Washington, who have expressed little interest in it, and even if they do make it into a policy, that could be years away. If approved, though, the policy reversal could provide more comprehensive food aid and relieve some of the demand millions of Americans are encountering amid the hunger pandemic. But Trump would never go for such a policy since he cares for the rich and the military-industrial complex even more than his predecessors. People, specially the lower classes that includes the 60 to 80 million Americans who Bernie Sanders says have no insurance coverage, have not even received any token from the state's annual $2 trillion aid-package approved by the Congress after Coronavirus hurt the US economy badly. New York mayor recently said Trump designed the package and granted all of it to the rich and not the poor.