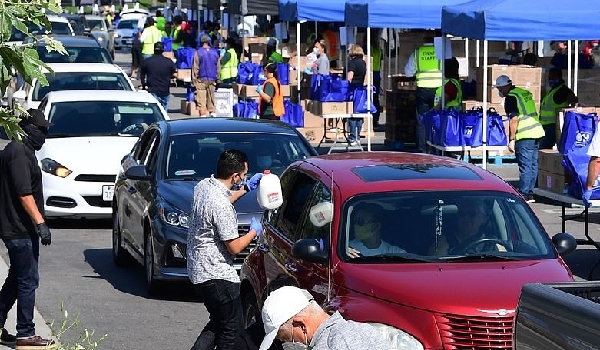 TEHRAN (FNA)- Low-income and poor people face far higher risks from the coronavirus due to chronic neglect and discrimination, and a muddled, corporate-driven, federal response that has failed them”, that’s according to Philip Alston, the UN Special Rapporteur on extreme poverty and human rights.

He has painted a picture of record layoffs, a weak safety net, and a Government “focusing primarily on businesses and the well-off”, saying that significant portions of the country “will soon face destitution unless Congress takes far-reaching action”.

Over a four-week period, more than 35 million people have filed for unemployment and US Federal Reserve economists reportedly project up to 47 million lost jobs through the summer.

Moreover, food bank use is skyrocketing and almost a third of housing tenants in the US reportedly did not pay April’s rent on time.

The UN expert maintains that people in poverty are disproportionately threatened by the coronavirus. Additionally, the poor have fewer resources to cushion economic blows and are more susceptible to mass layoffs and pay cuts. And low-income children have less capacity to access classes online.

No wonder Americans are lining up by the millions nationwide to wait in line at food banks to receive sustenance, showing a dystopian picture into daily American life. The Brookings Institution has also published a study showing that nearly one in five children in America are going hungry right now.

At the same time, the resources do exist to alleviate this widespread suffering of people. The United States Department of Agriculture is filled with requests from farmers to purchase their excess crops for the year, as food supply lines are cut due to school and restaurant closures, but they have so far dragged their feet.

Farmers in Washington are currently sitting on one billion pounds of potatoes with nowhere to go. In early April, Wisconsin dairy farmers were directed by industry organizations to literally pour tens of thousands of gallons of milk down the drain due to an oversupply in the market.

Thanks to America's monopoly capitalism, only the very wealthy are worthy of state intervention, as the federal government has virtually nationalized the stock market to maintain Wall Street dividends. In fact, what little of a social safety net exists to protect working families is being pulled from under them.

While it is true that the virus itself targets no identity in particular, the fact remains that those most likely to be infected and have negative health outcomes in America are the underprivileged.

In one particularly gruesome story, a 17-year-old was turned away at an urgent care in California for not having health insurance and later died, presumably from COVID-19 as tests showed later. To put it blunt: he died because he could not afford treatment.

The Office of National Statistics has said that black people are four times more likely to die from COVID-19 than white people. Another study in late April from the Kaiser Family Foundation found that both Latinos and black people have worse outcomes than white people. Social factors are the main contributions, the studies suggest.

In general in America, the poor and impoverished have generally worse health outcomes, more unsafe working conditions, and more exposure to illness. The trend will hold as blue collar Americans are forced to work in unsafe conditions; the rest who are unemployed will face food and housing insecurity.

The United States, the self-proclaimed champion of human rights, is one of the only countries that has not signed and ratified the 1966 International Covenant on Economic, Social, and Cultural Rights, basically the gold standard for this issue. Little wonder America is neglecting the interests of the underprivileged, which is happening under the policies of the Trump administration. Not that the previous administrations were doing it differently.