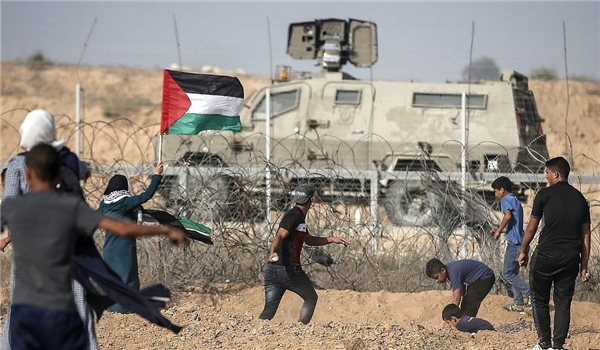 TEHRAN (FNA)- The Arab League has condemned Israel's illegal proposal to annex much of the occupied West Bank, saying the move would constitute a "new war crime" against the Palestinians.

During the meeting, Palestinian Foreign Minister Riyad al-Malki said the annexation would "end the two-state solution". He said the move would "turn the battle from a political one to an endless religious war ..." Thanks God the PA has eventually come to realize the reality on the ground that has long been underway since 1948 and grasped immediately by other Palestinian groups, people and factions.

Not surprisingly, the United Nations special Middle East envoy Nickolay Mladenov also said earlier that such a move would be a "devastating blow" to the two-state solution to the Israeli-Palestinian conflict, as the European Union said annexing Palestinian territory "would constitute a serious violation of international law".

To make things worse, the US has said it is ready to recognize Israel's annexation of key parts of the West Bank, but also asked Tel Aviv to negotiate with the Palestinians

As always, these pro-Israel currents are trying not to come up with a just policy with regard to their relevance when it comes to international justice, peace and security in occupied Palestine.

They systematically refuse to address the brazen violations of international law by Israel in both words and actions. Instead, they continue to bring up irrelevant issues in their latest assessment of the situation surrounding the usurper regime’s annexation policy - this time of course in a virtual reality show.

To this end, the Arab League shamelessly continues to overlook Israel’s human rights violation of numerous UN resolutions by maintaining secret relations with Israel. Strange enough and at the same time, it maintains secret trade and diplomatic ties with Tel Aviv.

The Arab League continues to overlook the fact that millions of Palestinians are still trapped in their own country, with no access to basic necessities and civil rights, a systematic procedure widely described not only as cruel but as inhumane.

The Arab League is basically at odds with itself. There are no significant negotiations or political processes underway right now either, and with all of this not only it is putting human life at stake but denying the Palestinian people the basic right to human dignity, with absolutely no hope in the short and medium term of resolving the Mideast conflict.

Unfortunately, while most of these violations and double standards are occurring regularly, the UN has also never bothered to put any pressure on Israel to stop bombing the besieged city of Gaza, where again millions are trapped, forced to live under constant Israeli bombardments and blockade.

The terrible situation in Gaza is the impact of violations of international humanitarian law on people, a serious decline of international law and an absence of any leadership by the UN on this major issue.

Because of its inaction, and together with the Arab League, the UN shares the responsibility of challenging conventional thinking about the underlying causes of loss of human dignity, marginalization and oppression in Gaza and occupied Palestinian territories.

If the Arab League and the UN are to prevent further Palestinian suffering, they have to stop blaming others for their own failure in the Holy Land. They have to make some changes. The number one challenge is changing the pro-Israel and pro-American narrative, which, right now, is toxic.

They have become used to appeasing the occupiers, looking the other way. Until they can change that mentality, Palestinians will continue to be abused and have their rights disrespected and violated by Israel.

The second challenge is forcing the Israelis to end their aggression against the Palestinians, instead of appeasing them for their powerful lobbies in the West or setting up virtual shows and issuing useless statements.

Lastly, the Arab League has to learn to address and accept the challenge of allowing the people of Palestine to determine their own fate and political future. They refuse to be occupied and pushed around by the Zionist regime and its Arab proxies.

That’s not a crime. As per the UN Charter, the right to freedom and self-determination is not an issue to be resolved; it is a human reality. That has to be respected, too.