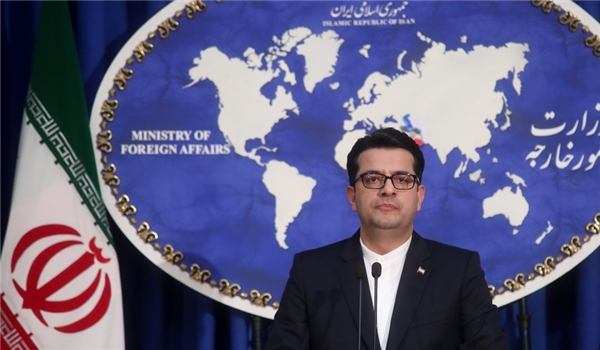 “As we celebrate the Earth Day, Trump’s exit from Paris Agreement and WHO fund halt, threatens the beauty of our Earth and the integrity of global COVID19-related health responses,” Mousavi wrote on his twitter page on Wednesday.

He added that US Secretary of State Mike Pompeo’s “wish for our planet is shameful, hypocrite and ignorant about the global norms”.

President Donald Trump's administration has pulled out of the Paris climate accord and slashed environmental regulations, but on Earth Day Wednesday it pointed the finger at China.

On the 50th anniversary of the international day of environmental awareness, the Trump administration indicated the steady decline in US carbon emissions over the past decade.

Pompeo noted that China, which has surpassed the United States as the top polluter, does not expect its emissions to plateau until 2030.

China is "offsetting the progress of countries all around the world in reducing global emissions," Pompeo told reporters.

He called on UN Secretary-General Antonio Guterres, who issued an Earth Day call for climate action, to take notice.

"I would urge Secretary Guterres to make sure we have the data right -- the facts right -- about who is actually delivering on the things that we all value," Pompeo said.

TEHRAN (FNA)- The Russian Embassy in Washington called upon the US government to focus its effort on fighting the coronavirus rather than criticizing the Russian vaccine.

TEHRAN (FNA)- Human Rights Watch (HRW) condemned the “harsh” police actions during the enforcement of a strict lockdown in Australia’s Victoria state, the epicentre of the country’s COVID-19 outbreak.

TEHRAN (FNA)- Western governments and their media outlets have been concocting narratives to sway public opinion in favor of militant groups operating in the Arab country, according to a report.