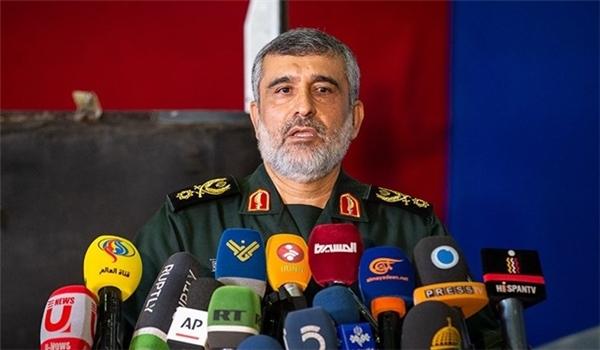 TEHRAN (FNA)- Commander of the Islamic Revolution Guards Corps (IRGC) Aerospace Force Brigadier General Amir Ali Hajizadeh announced that Iran has joined the superpowers which are capable of using combined fuel in satellite carriers after launching its first military satellite on the back of the home-made Qassed carrier.

“The satellite carrier is different from the previous ones as its propulsion system is a combination of liquid and solid fuel. The propulsion system has the same non-metal and composite body which was unveiled a while ago,” Hajizadeh said on Wednesday.

“Naturally, only the superpowers enjoy this capability and others are only consumers of this technology,” he added.

General Hajizadeh underlined that “access to the space is not a choice but an inevitable necessity and we should find our place in the space”.

The IRGC successfully launched and placed Iran’s first military satellite into the orbit on Wednesday.

The announcement was made on the day when the elite military force is marking the anniversary of its establishment on April 22, 1979 upon an order by the late founder of the Islamic Republic, Imam Khomeini.

Marking the occasion, Supreme Leader of the Islamic Revolution Ayatollah Seyed Ali Khamenei expressed his gratitude towards the IRGC for its performance.

“Today, we can see the world from space and this means expansion of the strategic intelligence and information of IRGC’s powerful defense force,” General Salami said.

General Salami said that all parts of the satellite, including the carrier and satellite, have been produced by the Iranian scientists despite the US sanctions, noting that the message of this important achievement is that sanctions are not an obstacle on the way of Iran’s progress and will further motivate the country to turn into a big power in the region and even the world in the new technologies.