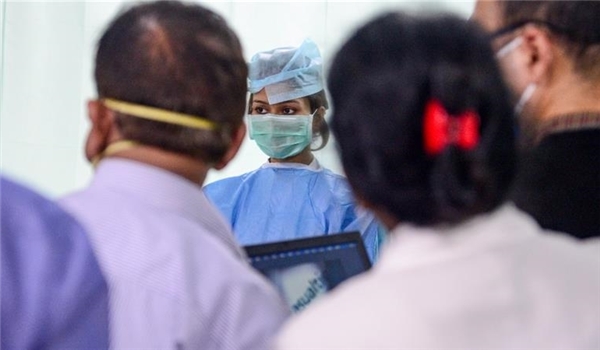 TEHRAN (FNA)- Two newborn babies died after hospitals refused to admit their Muslim mothers amid a surge in coronavirus-related Islamophobia in India.

In Jharkhand state, a Muslim woman miscarried after she was barred from receiving treatment in MGM Hospital in the city of Jamshedpur, The Telegraph reported.

Rizwana Khatun, 30, had rushed to the hospital after she began bleeding. Accused of spreading coronavirus, she was also beaten and asked to clean up her own blood.

Earlier this month, a baby died in the Bharatpur district of Rajasthan after a government hospital refused to admit the Muslim mother.

Members of the ruling Bharatiya Janata Party (BJP) have blamed the spread of coronavirus on a Muslim missionary group meeting in New Delhi in mid-March.

Thousands of attendees traveled for the Tablighi Jamaat event and failed to disband, despite the Delhi Government restricting gatherings of over 50 people.

They then returned home to India’s periphery, some taking the virus with them.

The Indian Government has announced that 30 percent of its 15,712 coronavirus cases are linked to the meeting, but there has been widespread underreporting of cases.

Similar gatherings within Hindu communities - including one led by the Chief Minister of Uttar Pradesh - have escaped criticism.

Muslim leaders have welcomed an investigation into the event but said it should not be used as an excuse to target the community as a whole.

Despite this, one hospital in the Northern city of Meerut in Uttar Pradesh ran an advertisement saying it would not admit Muslims without a negative COVID-test. Hindus are not being asked to provide proof.

Hospitals in the state of Telengana have also refused Muslims entry.

Many Muslims are reporting an uptick in hostility across India and say they are being refused access to some pharmacies and grocery stores.

Inter-communal tension has remained high in India since Prime Minister Narendra Modi was re-elected for a second term in 2019.

Modi introduced a controversial new citizenship law which excludes Muslims and scrapped the long-standing autonomy enjoyed by India’s only Muslim-majority state of Jammu and Kashmir.

In February, encouraged by a politician from the BJP, Hindu-nationalist mobs attacked Muslim homes and businesses in New Delhi. At least 50 people died.

TEHRAN (FNA)- The UK coronavirus death toll has increased by 155 in a large rise from Monday's low of just 16, the latest official figures released Tuesday show.

TEHRAN (FNA)- Italy's national serological testing plan is faced with a challenge as too few Italians are taking the test for coronavirus antibodies for the results to be valid, officials said.

Trump Breaks with Fauci, Says US in 'Good Place' in Fight Against Virus

TEHRAN (FNA)- President Donald Trump broke with top infectious disease expert Anthony Fauci on Tuesday by saying the US is in a “good place” in its fight against the coronavirus pandemic.

TEHRAN (FNA)- The United States recorded a one-day total of 60,200 new coronavirus cases, according to the count kept by Johns Hopkins University - a new all-time high which brings the total number of patients in the worst virus-hit country to 3 million.

TEHRAN (FNA)- The administration of President Donald Trump has submitted to the UN Secretary-General its notice to withdraw from the World Health Organization (WHO) by July 6, 2021, a senior administration official confirmed to CNBC.

Air Filter Can ‘Catch, Kill’ Coronavirus Instantly after Heating it to 392 Degrees, 99.8 Percent of Virus Was Terminated in Tests

TEHRAN (FNA)- An air filter could help fight the coronavirus pandemic by catching and killing the virus instantly.

TEHRAN (FNA)- Body camera footage captured a Florida police officer with his knee on a man's neck after a traffic stop. Officers from the Orlando Police Department had initiated the stop as a a woman, Janet Feliciano, pulled into her driveway on West South Street in the neighborhood of Parramore in July last year. [VIDEO]

TEHRAN (FNA)- Large flocks of migratory flamingos in Lake Urmia, Northwest Iran. Recent downpours causing floods, that recently left many provinces of Iran submerged, have made the world’s second largest saltwater lake come back to life, as the water level of the Northwestern Lake Urmia has raised dramatically. [PHOTOS]

TEHRAN (FNA)- Several thousand young people and students gathered in Central Brussels to protest against a recent court ruling that held that bans on headscarves in higher education were lawful. [VIDEO]

TEHRAN (FNA)- Agricultural land to the Southeast of Gaza City was damaged on Sunday evening, after Israeli air strikes targeted the region. [VIDEO]

TEHRAN (FNA)- Palestinian protesters burn effigies of US President Donald Trump, Trump's Middle East peace plan dubbed as the "Deal of the Century", and Israeli Prime Minister Benjamin Netanyahu, during a demonstration against Israel's plans to annex parts of the occupied West Bank, in Rafah in the Southern Gaza Strip. [PHOTOS]

Life in Age of Coronavirus

TEHRAN (FNA)- People around the world adapt to a new normal of staying at home, social distancing and masks during the coronavirus pandemic. [PHOTOS]

US: Several Arrested as National Guard Deployed in Portland

TEHRAN (FNA)- Several arrests were made in Portland as protests continued in the wake of George Floyd's killing. [VIDEO]
﻿
﻿
Sections