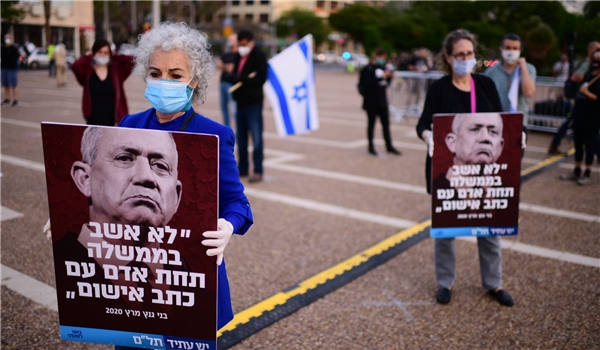 TEHRAN (FNA)- Israeli demonstrators turned out in droves to protest the government of Prime Minister Benjamin Netanyahu, as mindful of the need for social distancing, they stood two meters apart from each other in a visually spectacular gathering.

As Tel Aviv’s Rabin Square is often a staging ground for rallies, Sunday saw a gathering unlike any other before. Crowds of protesters – estimated by newspaper Haaretz at more than 2,000 – stood two meters apart from each other, their places marked on the ground with black crosses, RT reported.

The gathering, part of Israel’s ongoing ‘Black Flag’ demonstrations, was sanctioned by police, as long as social distancing rules were followed to the letter, and as long as organizers shelled out to supply the protesters with protective face masks.

The demonstrators took aim at the emergency powers granted to the country’s security agencies last month. Under the new powers, domestic intelligence agency Shin Bet has been authorized to track citizens’ mobile phone data, under the auspices of enforcing quarantine measures.

Sunday’s protest may have been allowed to take place, but Palestinian protesters in Jerusalem weren’t given the same freedom last week. Police fined anti-settlement demonstrators in the city 5,000 shekels ($1,400) on Friday. A week earlier, left-wing Israeli protesters were also slapped with fines after picketing the Kfar Saba home of former defense forces chief Gabi Ashkenazi.