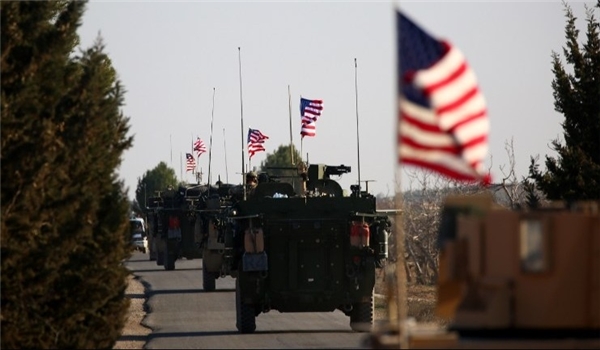 TEHRAN (FNA)- US forces dispatched a convoy carrying logistics supplies from Iraq to Syria's Kurdish-populated city of Qamishli in the Northeastern province of Hasakah, according to a report.

The sources added that the convoy headed from al-Yaroubiya countryside Northeast of Hasaka towards US bases near Qamishli.

On April 10, the UK-based group reported that a convoy of military reinforcement including 25 military vehicles and trucks carrying ammunition had arrived at the US base in al-Shaddadi city, South of Hasaka.

The US has long been providing the SDF with arms and militant training, calling them a key partner in the purported fight against the terrorist group of Daesh. Many observers, however, see the support in the context of Washington's plans to carve out a foothold in the Arab country.

Such support has also angered Washington's NATO ally, Turkey, which views militants from the Kurdish People's Protection Units (YPG) – the backbone of the SDF – as a terrorist organization tied to the homegrown Kurdistan Workers' Party (PKK) that has been waging a destructive war inside Turkey for decades.

In late October 2019, Washington reversed an earlier decision to pull out all of its troops from Northeastern Syria, announcing the deployment of about 500 soldiers to the oil fields controlled by
Kurdish forces in the Arab country.

The US has also deployed new troops to the Ein al-Assad base in the Western Iraqi province of Anbar as well as new Patriot missile systems and Counter Rocket, Artillery, and Mortar (C-RAM)
systems to a number of Iraqi bases it has occupied.