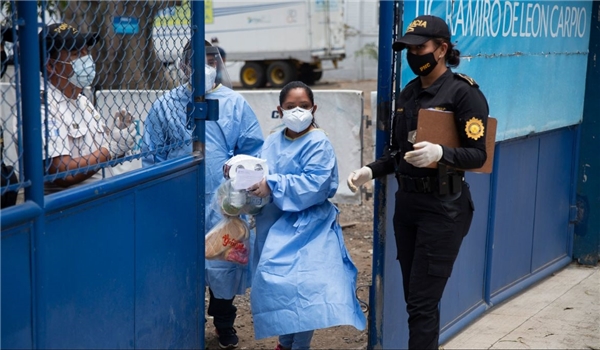 TEHRAN (FNA)- Guatemalan President Alejandro Giammattei said on Friday a number of migrants on a deportation flight from the US were infected with the coronavirus amid fears the contagion in the sprawling US migrant detention system run by Immigration and Customs Enforcement (ICE) is spreading to Central America.

Giammattei said 12 randomly selected migrants who arrived in Guatemala on the deportation flight tested positive for coronavirus when examined by the US Centers for Disease Control and Prevention (CDC), France 24 reported.

He suggested more on the flight had tested positive as well.

"A large part of it was infected," the president said in a televised address, referring to a flight carrying 73 Guatemalans that left the US for Guatemala City earlier this week.

The administration of President Donald Trump has pressured Guatemala to keep receiving deported migrants despite growing concern in the poor Central American nation that returnees are bringing the virus with them and could infect remote communities.

The flight, which took off Monday, has been at the centre of a political storm since Guatemalan Health Minister Hugo Monroy said up to 75 percent of passengers on a deportation flight were infected with the virus. The Associated Press later cited a Guatemalan official saying 44 people on the Monday flight were infected.

Only 400 detainees in the US out of more than 32,000 have been tested so far, according to testimony that Matthew Albence, the acting director of ICE, gave Friday to a congressional committee.

The House Committee on Oversight and Reform said that Albence “also confirmed that ICE does not routinely test detainees before deporting them”.

More than 1,600 people deported from the United States to Guatemala over the last month were allowed to go home and into voluntary, unenforced quarantine.

Fears are rising that it may have seeded the Central American nation with an untold number of undetected cases, increasing its vulnerability to the pandemic.

The US said on Thursday it had sent a CDC mission to assess the situation and test the migrants, who remain in quarantine in a hospital.

It is not clear when the deportees became infected. There have been 30 confirmed cases of Covid-19 among ICE employees working in the agency's detention facilities, including 13 at the Alexandria Staging Facility in Louisiana, ICE data shows.

Only on Monday did Guatemala begin testing every passenger who shared a flight with someone confirmed as positive. The same day, a plane carrying 76 people arrived on an ICE flight from Alexandria, Louisiana. A migrant who was feeling ill was tested and found to be infected, leading to tests for everyone else. Forty-three tested positive despite showing no signs of illness and are in medical quarantine, officials said.

Giammattei, who spoke while wearing a surgical mask, said a CDC team also tested 12 of the passengers at random on Friday and all tested positive. He said flights would be suspended until the US certifies passengers on such flights are free of the new virus.

“It’s very worrying because these adults and children are being deported from places with high levels of contagion,” said Leonel Dubón, director of Refuge for Childhood, a centre for young and vulnerable deportees in Guatemala.