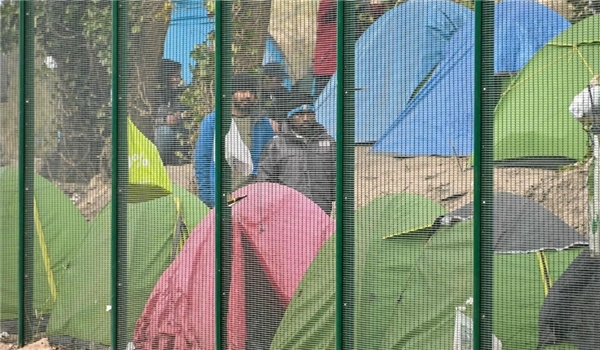 TEHRAN (FNA)- The last remaining volunteers working with refugees and migrants in Northern France warned that COVID-19 is spreading quickly through the makeshift camps where over 1,000 people are sheltering without proper sanitation, water supplies or food.

Care4Calais, one of the only organisations still providing emergency services to migrants and refugees in Calais, said the number of people exhibiting symptoms of COVID-19 rose from two to nine in just three days last week, The Guardian reported.

“Although the numbers are still low, there is no way to contain the spread in these terrible conditions,” Clare Moseley, founder of Care4Calais, said.

“Now we know the virus is in the camps we urgently need the authorities to take action, and faster. The refugees can’t use the mitigation methods the rest of society are practising, like social distancing. Without these, the spread of the disease could be exponential and we estimate that half the population could be infected within four weeks,” Moseley added.

Last week, local authorities in Calais and Dunkirk began to move people from the informal camps into accommodation centres, but volunteer groups say the pace is too slow, with approximately 80 people transported by bus from the camps to the centres last week. NGOs say they believe the accommodation centres currently only have capacity for 400 people in total while there are thought to be about 1,500 people sleeping rough in informal camps in Northern France.

Grassroots aid groups also say that food supplies are running out and the French authorities have limited the supply of water to informal settlements.

According to the aid groups, people are relying on daily food packs supplied by the government, which consist of a piece of bread and cheese. Under the strict quarantine measures in place, without proper paperwork migrants cannot enter the supermarkets to buy food for themselves.

Before the first cases of COVID-19 were reported in the camps last week, conditions were already deteriorating. Aid organisations have reported overcrowded tents, rat infestations and worsening health conditions among children and adults sleeping outside.

“Refugees living in Northern France already have weakened immunity from chronic stress and the deplorable conditions they are forced to live in,” Sarah Story, co-founder and director of Refugee Info Bus, said, adding, “All homeless refugees in Northern France must be provided with safe, obligatory accommodation and food, not just for their safety, but for us all.”