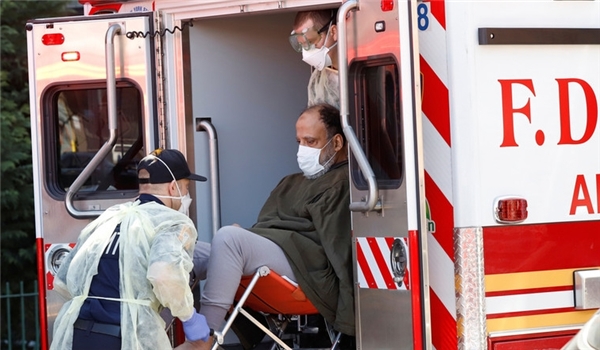 TEHRAN (FNA)- In the middle of the coronavirus crisis, many hospitals across the US are suddenly losing revenue, while in some cases that means staff are being furloughed, right as the pandemic is worsening, CBS News reported.

In Florida, at Miami-Dade County's Jackson Memorial Hospital, executives say they're taking pay cuts, and other employees are being asked to go on temporary furloughs due to the financial strain.

"I couldn't understand it, because all around the country they are asking for nurses right now," Fairchild stated, adding, "They're asking for health care workers to come in to work in facilities that are in dire need with the coronavirus and the increased numbers of coronavirus cases. So, we were kind of puzzled."

The ripple effects of preparing for the coronavirus crisis are hitting hospitals around the country.

Boston Medical Center health system temporarily furloughed some 700 employees. A health system in Sarasota, Florida, announced its revenue dropped by $16 million in March; it's furloughing some employees and cutting hours for others. Similar cuts are in place at a Syracuse, NY hospital.

The problems are reflected in a new nationwide survey of hospitals from the Inspector General for Health and Human Services. The watchdog agency's survey, released on Monday, reported that in addition to shortages of ventilators and protective personal gear for health care workers and insufficient tests for COVID-19, some hospitals are trying to reduce costs by temporarily reducing staff.

"In order to prepare appropriately for taking care of this infectious disease, hospitals have stopped elective procedures, which bring in money to the hospital," assistant IG Ann Maxwell said, adding, "They've stopped other procedures as well. So, they're losing revenue."

In Miami, Carlos Migoya, the CEO of Jackson Health System (which runs Jackson Memorial), said the answers are in the math.

"We're a public health system," he stated, adding, "Our operating margins are really, really tiny. We don't make a whole lot of money, and we don't have the huge working capital of a lot of for-profit health care systems."

Migoya noted since his hospitals have stopped doing most elective surgeries, his system has lost 40 percent of its revenue, and predicts it will lose $25 million in the month of April alone. So, he said he's keeping front-line doctors and nurses, but cutting wherever else he can.

CBS News consumer investigative correspondent Anna Werner asked Migoya, "When do you think some of these hospitals might hit bottom?"

"We are already hitting bottom," he replied, adding, "The moment the revenue stopped coming in, the bottom is already there. We just don't know for how long a period of time."

Some hospitals indicate that they can and will call workers back when the need becomes greatest.

Migoya stated if hospitals like his knew when they would receive federal stimulus money, it would help them plan.

A Department of Health and Human Services Spokesperson gave "CBS This Morning" the following statement:

"Key to the success of a whole-of-America approach to combatting COVID-19 is working with our state and local partners to make sure America's healthcare providers have the tools and the resources they need to take care of patients – including spurring private industry to ramp up production of needed materials. HHS, alongside other federal agencies, has been working day and night to support local communities and take actions to help our healthcare system respond quickly and effectively. Secretary Azar has already taken action on a recommendation in this report, requesting, among a series of proposals, that governors allow licensed healthcare providers to practice across state lines. Additionally, states should rapidly re-activate licenses of retired healthcare practitioners and relax the scope of practice requirements to ensure doctors and nurses can practice to the full extent of their capability."

"Further, as noted in this OIG report, the department, through the Centers for Medicare and Medicaid Services (CMS), has taken an unprecedented array of regulatory actions to increase hospitals' and other healthcare providers' flexibility to fight this pandemic and increase capacity, such as allowing non-hospital buildings/space to be used for patient care and quarantine sites, provided that the location is approved by the state. Others include CMS' Hospital Without Wall strategy, which allows hospital systems to function as a kind of collaborative headquarters coordinating a variety of settings of care. Hospital systems can use these flexibilities to create new treatment sites to expand capacity, safely separate patients infected with coronavirus from those who are not, and preserve personal protective equipment. Finally, Secretary Azar is leading an Administration-wide policy process to distribute billions in funding through the Coronavirus Aid, Relief, and Economic Security (CARES) Act signed by President Trump to provide relief in a way that is fast, fair, transparent and simple.  We appreciate valuable feedback from those on the frontlines of this pandemic, and we will continue to support them in every way possible to defeat it."