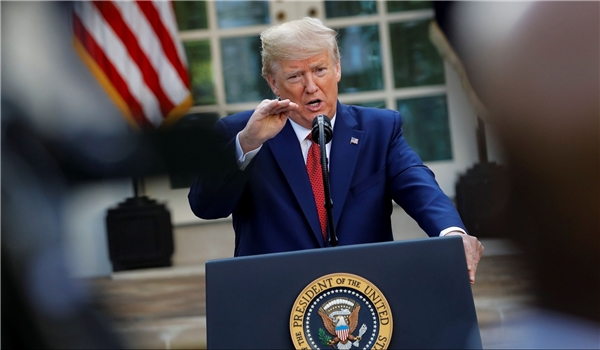 TEHRAN (FNA)- US President Donald Trump warned that Washington may retaliate against New Delhi over a decision to bar exports of an experimental treatment for COVID-19, not long after asking his Indian counterpart to reverse the move.

Though India on Saturday imposed a blanket ban on the export of hydroxychloroquine – an antimalarial drug under clinical trial as a treatment for the coronavirus – Trump told reporters on Monday that New Delhi could face consequences if Prime Minister Narendra Modi fails to drop the restriction, insisting he wasn’t aware that a final decision had been made, RT reported.

“I don't like that decision. I didn't hear if that was his decision. I know he stopped it for other countries,” Trump said, referring to the Indian PM.

"If [Modi] doesn’t allow it, that would be okay. But of course there may be retaliation. Why wouldn't there be?" Trump warned.

Indian producers provide the US nearly half of its supply of the drug, according to Bloomberg News, which has been repeatedly touted by Trump as a potential treatment for the deadly virus gripping all 50 states and much of the world. While concrete evidence for its effectiveness against COVID-19 remains thin, testing is already underway in states like New York and Michigan, while US Surgeon General Jerome Adams acknowledged on Sunday that there were early signs the drug was “helping”.

After a phone call with Modi over the weekend, Trump said his counterpart was “giving serious consideration” to allowing hydroxychloroquine to continue flowing to the US, adding that he told Modi he “would appreciate it if they would release the amounts that we ordered”, but the PM has yet to announce a reversal of the ban.

A readout of the phone call provided by the Indian Foreign Ministry also made no mention of the request.

The export restrictions come as India sees a surge of infections, the state of Maharashtra being the worst-hit, counting 4,778 cases of COVID-19 across the country and 136 deaths, according to Johns Hopkins University. All of India was placed under lockdown by order of the prime minister in late March to stem the spread of the virus, set to last until mid-April barring any decision to extend it.

With fatal disease and death tolls continuing to soar worldwide, infecting more than 1.3 million and killing nearly 75,000, the coronavirus pandemic has yet to reach its peak in the US, the globe’s largest hotspot, where more than 360,000 people have been sickened. New York is by far the hardest-hit state, where some hospitals have found themselves overwhelmed with patients and fatalities, while major outbreaks in New Jersey, Michigan, California and several other states continue to spread.