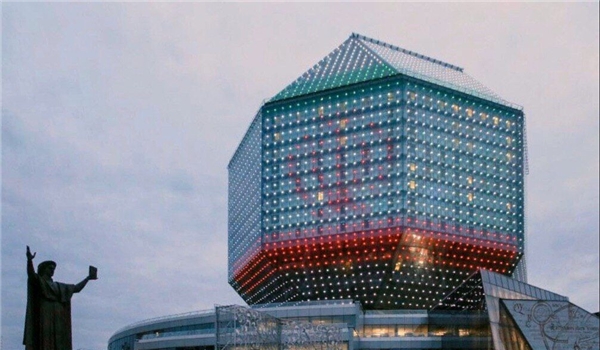 TEHRAN (FNA)- Exterior facade of the Belarusian National Library building illuminated in three colors of the Iranian flag as a sign of solidarity and sympathy with the country's people in combating coronavirus.

The symbolic move was welcomed by the Belarusian media outlets and people as a sign of empathy with the Iranian government and nation in battling the virus.

Iran's Ambassador to Belarus in a tweet on Monday appreciated Belarusian friends' initiative, saying that "Iranian people never forget friends who stood by them during difficult times".

The coronavirus COVID-19 is affecting approximately all countries and territories around the world. The virus was first reported in the central Chinese city of Wuhan late last year. It has so far killed nearly 75,000 people and infected nearly 1.3 million others globally.

As for Iran, the Iranian health ministry announced on Monday that 2,274 new cases of infection to COVID-19 virus have been identified in the country, adding that 3,739 patients have died so far.

“According to definite diagnostic standards, a sum of 2,274 new cases of infection to COVID-19 virus have been identified in Iran during the past 24 hours, increasing the number of infections to 60, 500,” Health Ministry Spokesman Kianoush Jahanpour said.

He added that fortunately, 24,236 patients infected with COVID-19 virus have also recovered and been discharged from hospital.

Jahanpour said that 136 coronavirus patients have passed away during the past 24 hours, noting that the death toll has increased to 3,739 so far.

As the death toll from the virus surges, Iran intensifies its preventive safety measures. Closure of schools and universities has been extended until early April.

Why Are Victims of Corona Counted But No One Counts Millions of Oppressed Muslims?

TEHRAN (FNA)- Who is responsible for all the unlawful bloodshed in Afghsnistan, Yemen, Libya, Iraq, Syria and other countries? [VIDEO]

TEHRAN (FNA)- Foreign Ministry Spokesman Seyed Abbas Mousavi said it is early to talk on the cause of the recent blast at Natanz nuclear facility, and warned that Tehran would show severe reaction if it is proven that foreigners were involved in the incident.
﻿
﻿
Sections