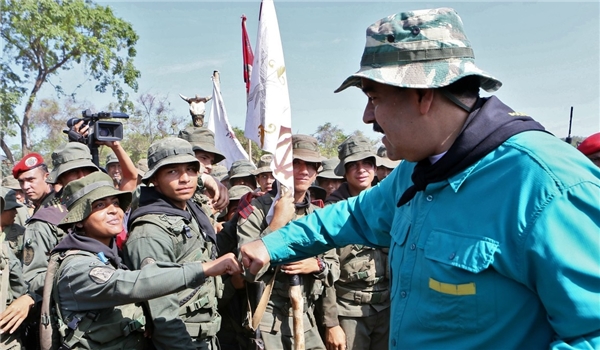 TEHRAN (FNA)- President Nicolas Maduro stated that he had “ordered the mobilization of artillery [pieces]” in the country’s strategic areas in order to protect the security of ordinary Venezuelans.

“I denounce the existence of groups financed from Colombia and the US, which seek to undermine the stability of [our] homeland with violent actions,” he wrote on his Twitter page, RIA Novosti reported.

The remarks came after he said during a ministerial meeting in Caracas earlier on Saturday that these groups believe that “they can take advantage of the [coronavirus] pandemic and the quarantine to carry out terrorist actions and a coup”.

He added that he had announced the mobilisation of “the artillery pieces” within the framework of the ongoing 2020 Bolivarian Shield drills, which kicked off in mid-February, “to be prepared for the fight for peace”.

Maduro’s statement comes a few days after President Donald Trump announced that the US military would deploy naval vessels and aircraft to the Caribbean as part of an enhanced counter-narcotics operation.

“We must not let the drug cartels exploit the [COVID-19] pandemic to threaten American lives. In cooperation with the 22 partner nations US Southern Command will increase surveillance, disruption and seizures of drug shipments and provide additional support for eradication efforts which are going on right now at record pace,” Trump stated.

He was echoed by Joint Chiefs of Staff Chairman Mark Milley, who told reporters earlier this week that the US military had managed to obtain intelligence suggesting that “the drug cartels as a result of COIVD-19 were going to try to take advantage of the situation and try to infiltrate additional drugs into our country”.

Milley spoke after Maduro asked in a letter on Tuesday for “invaluable support” from the leaders of governments around the world, referring to “this unthinkable and arbitrary persecution [by the US]”, which accuses the Venezuelan president of being involved in drug trafficking - something that has been rejected by him as “false”.

He also condemned the US for continuing to pressure the Venezuelan economy with sanctions, preventing Caracas from obtaining medicine and medical equipment amid the coronavirus outbreak, which has already claimed the lives of at least three people in the Latin American country.

The statement followed Maduro warning in an address last week that the authorities of Colombia and the US will face consequences if they crack down on his country’s political elite.

“If one day the imperialists and Colombian oligarchy dare to touch even a single hair [of those from the elite], they will face the Bolivarian fury of an entire nation that will wipe them all out,” Maduro noted.

The Venezuelan president’s remarks were preceded by US Attorney General William Barr announcing that the Department of Justice (DOJ) had brought “narco-terrorism” charges against Maduro and five senior officials in his government, including Venezuela’s defense minister and the supreme court's chief justice. The DOJ also offered a series of rewards for information on the officials, including $15 million for Maduro himself.

The developments come amid ongoing tensions between the US and Venezuela, which were further exacerbated after Washington recognised opposition leader Juan Guaido as the Latin American country's president in spite of a vote in 2018 that saw Maduro re-elected to a new term.

While a number of Western states also supported Guaido, Maduro slammed the self-styled president as a "US puppet". Russia, China, Turkey, and a number of other countries supported Maduro as Venezuela’s only legitimate president.