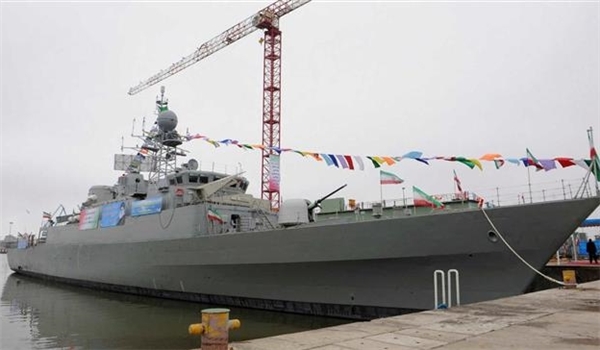 TEHRAN (FNA)- Head of the Marine Industries Organization of Iran Rear Admiral Amir Rastegari announced that the country will build a 6,000-ton destroyer soon, and said it has the ability to produce nuclear-powered submarines.

"The destroyer will be a trimaran ship – a vessel consisting of multiple hulls – equipped with very special capabilities," Rear Admiral Rastegari said.

He noted that the destroyer will extend the capabilities of the Iranian Navy for longer operations in the seas with very special defensive and offensive capabilities.

"The vessel can conduct operations for at least two months without docking for supplies," he added.

Rastegari further said that the construction of the vessel is expected to start this year.

He also declared Iran's readiness to produce nuclear submarines, and said, "Submarines are a vital asset in naval conflicts and their production is a matter of state-of-the-art technology across the world."

“Thankfully we have acquired such a knowhow and capability,” he said, adding that “we have not yet received orders" to produce nuclear submarines.

The rear admiral stressed that the production of nuclear-powered submarines does not go against Iran's commitments to the 2015 nuclear deal.

“We truly do not have high-speed craft that can travel beyond 130 kmph and carry missiles and military radar systems with them produced anywhere,” he said.

“The Americans have high-speed craft which can travel about 105 kmph at most,” he said.

The rear admiral explained that the development of the fast-attack craft was a very “complex field” which demanded advanced designs that allow the craft to travel at high speeds without detaching from the water level.

Highlighting other undergoing projects of the marine organization, Rastegari added that all Iranian ships under development will be equipped with point-defense systems.

The military official also underlined plans for future production of the “Pirouzan” hovercraft and a complete composite-body minesweeper.

Tehran launched an arms development program during the 1980-88 Iraqi imposed war on Iran to compensate for a US weapons embargo. Since 1992, Iran has produced its own tanks, armored personnel carriers, missiles and fighter planes.

Yet, Iranian officials have always stressed that the country's military and arms programs serve defensive purposes and should not be perceived as a threat to any other country.

In relevant remarks in late March, Iran's Defense Minister Brigadier General Amir Hatami said the country's Army would be equipped new hi-tech weapons systems and vessels, including a destroyer, a mine-hunting warship and flying boats, in the next few months.

"Last year we tried to preserve and stabilize this situation. 1398 (March 21, 2019-March 20, 2020) was a special year for us as we had a lot of ups and downs which had begun since 1397 and our enemies were hell-bent to bring insecurity inside the soil of the Islamic Republic. Yet, we strongly responded all their measures and the enemy noticed that it cannot challenge Iran's deterrence power through proxy works," Brigadier General Amir Hatami said.

Pointing to the growing trend in the domain of arms and equipment, Amir Hatami reiterated, "The year 1398 was among the honorable years of the defense industry. In the defensive field we put into effect two great works, namely, Khordad 15 Site and Baavar 373 as a turning point."

General Hatami continued, "In the missile field we announced decisively that all missiles of the Islamic Republic of Iran, both those that had been produced previously or the ones that have recently been produced, have become precision-guided."

Referring to designing, manufacturing and flying of Kowsar training jet in last year, he said, "We continued the production line of Kowsar and, God willing, we will have a few products of Kowsar in the current year."

Iran's defense minister, mentioning some of the achievements in the ground field, such as Ra'd, Tufan and Aras, added, "In sum, we had conducted 152 research works and, while the enemy, employing maximum pressure, was trying to prevent us from reaching our goals, thank God, the 152 projects were totally attained."

General Hatami informed of two to three good products in the marine field in the year 1399 that has just started (March 21), and said, "The destroyer Dena and a mine-hunting warship will be delivered to the army, God willing; and in the field of flying boats and speed boats there will be good tidings."

He went on to say that in the cruise domain we will have air-based cruise, adding, "As for the movability of cruise missiles, i.e. shooting while moving, a very good work is underway which is very important and in the year 1399 we will witness it."