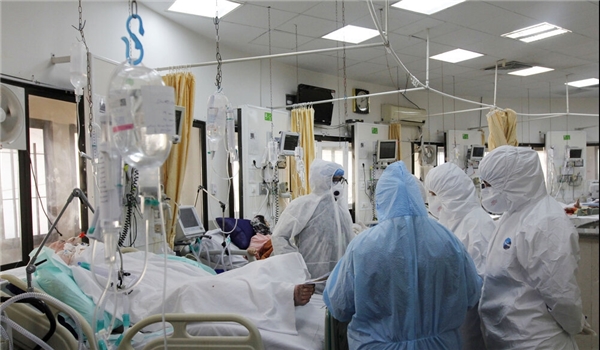 TEHRAN (FNA)- Seyed Ghorban Hosseini overcame COVID-19 disease after 15 days of hospitalization at a hospital in Gorgan, Northern Golestan province to be the second aged survivor in the region.

The old man was discharged from hospital as the second man, after the news of recovery of a 101-year-old man from the same region went on viral just a few days ago.

Also, an Iranian nurse in Delfan town, Western Iran, postponed her wedding ceremony in a bid to join the national fight against coronavirus disease.

In his phone conversation with the Head of Plan and Budget Organization Mohammad Bagher Nobakht, Rouhani called for acceleration of allocating $18bln facilities that had already been ratified by the government to assist coronavirus-hit jobs in the country.

However, acting chief of Iran's Red Crescent Society (IRCS) Karim Hemmati announced that the organization is planning to offer assistance to almost 2 million people who have lost their jobs due to the coronavirus epidemic.

Moreover, Iranian Vice-President for Science and Technology Sorena Sattari announced that three groups are striving to produce COVID-19 vaccine while there is a nationwide mobilization against the epidemic.

Meantime, an official of Iran's Ministry of Industry, Mine and Trade said that Alborz province is a main center of production of masks and alcohol to contribute to the nationwide struggle against coronavirus epidemic.

And, deputy Minister of Industry, Mine and Trade Hossein Modares Khiabani said that Iranian Production units have boosted capacities to produce over 15 million coronavirus protection face-masks while the country is seriously involved in combating the epidemic.

Spokesman of Iran's Health Ministry Kianoush Jahanpour announced on Friday that 2,715 new coronavirus cases have been identified during the past 24 hours totaling the number of the infected to 53,183.

"For the past 24 hours, according to definite diagnostic standards, 2,715 new cases infected with COVID-19 have been identified in the country which means the total number of the patients has reached 53,183", Jahanpour said, expressing happiness that so far 17,935 patients have recovered and been discharged from hospital.

He added that unfortunately 134 coronavirus patients have succumbed to the disease during the past 24 hours, increasing the death toll to 3,294.

Jahanpour also mentioned that 4,035 coronavirus patients are in critical conditions.

The coronavirus COVID-19 is affecting approximately all countries and territories around the world. The virus was first reported in the central Chinese city of Wuhan late last year. It has so far killed more than 54,000 people and infected over 1 million others globally.