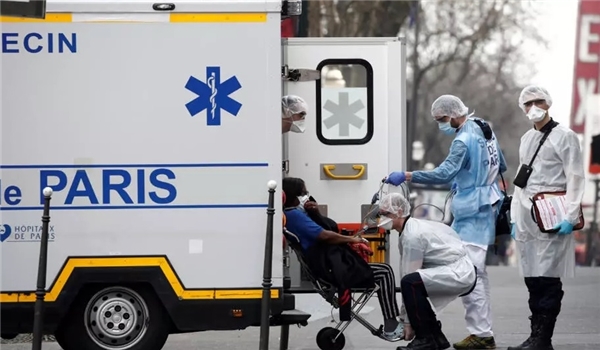 TEHRAN (FNA)- France recorded 471 new deaths in hospitals and 884 deaths in retirement homes due to the coronavirus, the country's chief medical adviser told a press conference on Thursday.

France's Director General of Health Jérôme Salomon announced the figures during a daily press conference making for the first time a distinction between coronavirus deaths recorded in hospitals and patients in retirement homes, FRANCE24 reported.

He said that a provisional tally showed that around 884 people in total had died in nursing homes after contracting the virus. He added that the number of coronavirus-related deaths in hospitals rose to 4,503.

It makes for a total of 5,387 lives lost to coronavirus in France, so far.

Salomon cautioned that coronavirus deaths in retirement homes could turn out to be higher than the reported number, as authorities were still gathering data from across the country.

In a televised interview on TF1 Thursday night, Prime Minister Édouard Philippe urged the French to respect the lockdown measures imposed since March 17, to ensure a levelling off of new cases of the virus.

"This is the only way for the health service to overcome the peak" of the virus, he stressed.

He conceded the nationwide lockdown "would probably be extended" beyond the current deadline of April 15.

With the traditional spring break approaching, Philippe sternly warned the French against considering holidays away saying there would be checks and fines for those who violated the rules.

But he noted that the French health system – which has ramped up its intensive care capacity – was bearing up amid the crisis.

"I want to tell the French that the dam is holding. And we must all act together so it continues to hold," he added.

According to the Johns Hopkins University Coronavirus Resource Center, the global death toll from the virus on Thursday topped 50,000 with total infections surpassing one million.