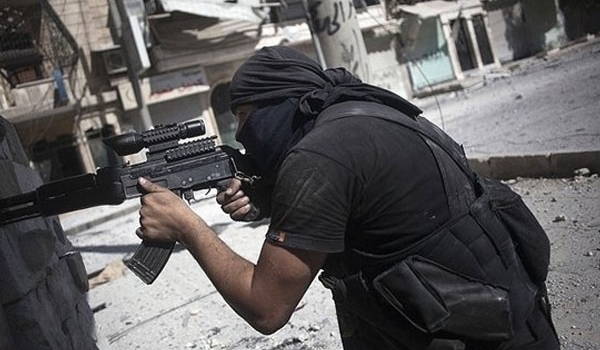 TEHRAN (FNA)- In a joint statement on Saturday, the Russian and Syrian interagency coordination headquarters stressed that the current disastrous situation in the Rukban refugee camp is a result of the illegal occupation of the area by American forces.

“We believe that the American side’s reluctance to exert influence on their militants to ensure unhindered departure of people from the Camp and the safe work of humanitarian representatives in the Al-Tanf zone they occupied is clear evidence of their intention,” the statement pointed out, according to RIA Novosti.

The headquarters stated that the US military’s “true intention” with regard to Rukban is to use it as an “assembly line for training extremists used to maintain hotbeds of tension in Syria”.

According to the headquarters, the only solution pertaining to the Rukban camp’s humanitarian problem is its final disbandment, the pullout of American forces from the occupied area of Al-Tanf, and the transfer of territory to the legitimate Syrian government.

This, the statement pointed out, will help guarantee “the return Syrians to normal life in their homes”.

The statement also underlined that the Russian and Syrian sides had completely fulfilled all their obligations in line with the UN plan for evacuating the remaining refugees from Rukban.

“We consider that further attempts to justify their inaction on the part of the United States and UN humanitarian agencies are unreasonable,” the document emphasised.

The headquarters recalled that there are currently 13,500 refugees in Rukban, including 6,000 militants and members of their families.

The rest remain in the camp “due to bullying by US-controlled militant groups” which claimed that if these residents return home, they will allegedly face “the Syrian authorities’ arbitrariness”.

“Once again, we declare with all responsibility that for every Syrian who wishes to enter the government-controlled territory the doors are always open. All the necessary conditions for decent accommodation have already been created. Refugees from the Al-Tanf zone will be provided with the necessary humanitarian, medical, and social assistance,” the headquarters noted.

They signaled Damascus’ readiness to test all those leaving Rukban for coronavirus and, “if infected, to organise their hospitalisation and treatment”.

The statement comes after the Russian Foreign Ministry said in a statement in October 2019 that Washington should end the occupation of the Al-Tanf border crossing in Syria's Homs Governorate.

"US service members are stationed illegally in this area...blocking the road that connects Iraq and Syria. We demand an end to their occupation," Deputy Foreign Minister Sergei Vershinin told journalists.

Earlier, the Russian Centre for Syrian Reconciliation said in September 2019 that the so-called "camp administration, controlled by illegal armed units" refused to let UN buses inside to evacuate those in need, with an intention of keeping the refugees at Rukban as a human shield.

The remarks followed a significant amount of cargo delivered by the United Nations and the Syrian Arab Red Crescent to Rukban being seized by militants and moved to a base belonging to the militant group Kuwat Shahid Ahmad al-Abdo, located to the North of the Rukban camp.

Despite Washington's previous pledge to withdraw its forces from Syria, US troops are still in place in various parts of the country, where they operate without permission from either the United Nations or Damascus. As far as Rukban is concerned, American forces established the camp in the area of the occupied Homs Governorate near Syria's borders with Iraq and Jordan.