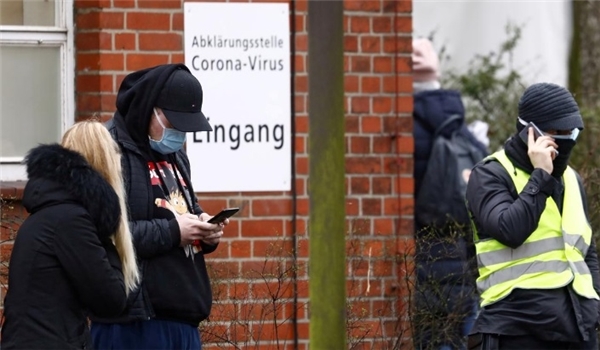 TEHRAN (FNA)- According to statistics from the Robert Koch Institute for infectious diseases, the number of confirmed cases of coronavirus in Germany has risen to 48,582, while 325 people have died of the deadly disease.

Chancellor Angela Merkel's chief of staff told a German newspaper that Germany will not ease measures to prevent the spread of coronavirus before at least April 20, World News reported.

Despite being one of the worst-hit countries in terms of infection levels, Germany has been an outlier when it comes to its fatality rate, which is around half a percent.

The national agency for disease control and prevention had raised the risk of the coronavirus to public health to “high”.

RKI President Lothar Wieler had stated that he assumed the number of coronavirus cases is "significantly higher" than reported to the institute.

Germany could be dealing with 10 million coronavirus infections in the coming months if its citizens do not adhere to measures aimed at slowing the spread of the virus, the country's top disease control official noted.

The coronavirus pandemic may go on for two years and develop in waves, the Robert Koch Institute President warned.

"The pandemic is developing in waves. We know this is exactly the case. But how fast are these waves? And when will this pandemic infect the projected 60-70 percent of the world's population? This can take years. We project it to be two years," Wieler noted at a briefing.

Merkel gave a grave prognosis to parliament days ago, telling members that 60% to 70% of the German population could contract the coronavirus at some point, according to Bild.