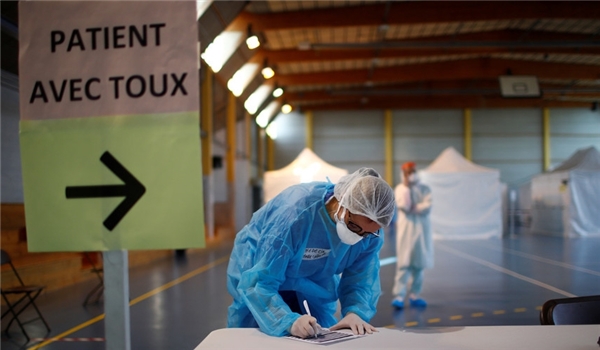 TEHRAN (FNA)- The death toll from the Covid-19 outbreak reached 1,995 in France as Prime Minister Edouard Philippe stated in a speech the government had decided to extend the country's virus lockdown by two weeks until mid-April.

Announcing the latest fatalities on Friday evening, France’s director-general of health announced that there have been a total of 32,964 confirmed cases of the novel coronavirus in the state, Europe News reported

Earlier Friday, Philippe warned of “very difficult” days ahead as the country sees a rise in cases, and said the government would extend a raft of nationwide restrictions aimed at curbing the spread of the deadly disease by at least a fortnight, to April 15.

On Friday, the head of the French Hospital Federation warned that a spike in coronavirus patients means hospitals in and around Paris will reach saturation point within 48 hours, with the peak not expected until April.

“We will clearly need help in the Ile-de-France (Greater Paris region) because what happened in the East is coming here,” Frederic Valletoux told BFM TV.

“We will be at the limit of our capacities in 24 or 48 hours. We will need to show real solidarity between regions, hospitals and increase the numbers of patient transfers,” Valletoux stated.

President Emmanuel Macron announced stringent restrictions on the movement of citizens last week with the lockdown expected to last as long as six weeks.

Europe has become the latest epicenter of the Covid-19 pandemic, with Italy being hit the hardest. France, Spain, UK, and Germany also saw massive surges in cases in the past week.

TEHRAN (FNA)- The third Iranian oil tanker, named Petunia, has entered the Venezuelan waters to deliver its much-needed gasoline cargo. Just like the first and second tanker, Petunia is being escorted by the Latin American country’s navy to its destination. [VIDEO]

Maduro Thanks Iran for Sending Oil Tankers; Slams US for Disrupting Fuel Shipments to Venezuela

TEHRAN (FNA)- Venezuelan President Nicolas Maduro has thanked Iran for sending 5 oil tankers to his energy-hungry and sanction-hit nation, while slamming the US for disrupting international fuel shipments headed to the Latin American country. [VIDEO]

TEHRAN (FNA)- Anger over the death of George Floyd under a police officer’s knee spilled into the streets of Minneapolis for a second night Wednesday, with a shooting death, widespread looting and a fire that shrouded the Lake Street neighborhood in smoke. [PHOTOS]

TEHRAN (FNA)- Hundreds of Colombian migrants, tourists, and students remain stranded in Sao Paulo International Airport due to a lockdown their country imposed to halt the spread of the new coronavirus. [PHOTOS]

TEHRAN (FNA)- The United Nations refugee agency says its work in Yemen is near a “potential breaking point” as coronavirus spreads in the war-damaged country, with rising numbers of families dying from hunger and disease.

26 Arrested in France, Belgium over Truck Deaths of 39 Vietnamese Migrants

TEHRAN (FNA)- The French prosecutor's office said on Wednesday that 26 people had been arrested in France and Belgium in connection with the deaths of 39 Vietnamese migrants found in the back of a truck near London last year.

Iran: Brutal Killing of Floyd Indicates Systematic Racism in US

TEHRAN (FNA)- Iran on Thursday blasted again the US police for showing violence against the black people, describing it as an indication of systematic racism in the country.

TEHRAN (FNA)- More than 159,000 excess deaths coinciding with the ongoing coronavirus pandemic have been reported in 24 European countries since early March, Hans Kluge, the WHO regional director for Europe, said on Thursday.

TEHRAN (FNA)- Commander of the Islamic Revolution Guards Corps Navy Rear Admiral Alireza Tangsiri announced that the IRGC speed boats are able to voyage at the speed of 92 knots per hour, three times faster than the US vessels.

TEHRAN (FNA)- The elites who rule the West have put selfish or ideological goals first when choosing their response to the COVID-19 pandemic, Russia’s foreign Minister said in a scathing op-ed.

TEHRAN (FNA)- The Iranian health ministry announced on Thursday that 2,258 new cases of infection with COVID-19 virus have been identified in the country in the past 24 hours, expressing pleasure that more than 112,000 patients have recovered.

VP: Iran Exporting Machinery to Europe for Production of Masks

Iranian Envoy: US No Big Brother to World

TEHRAN (FNA)- Iranian Ambassador to Caracas Hojjatollah Soltani said that his country and Venezuela stood against Washington's bullying to prevent their trade, saying that the US is not in a position to rule the world.
﻿
﻿
Sections