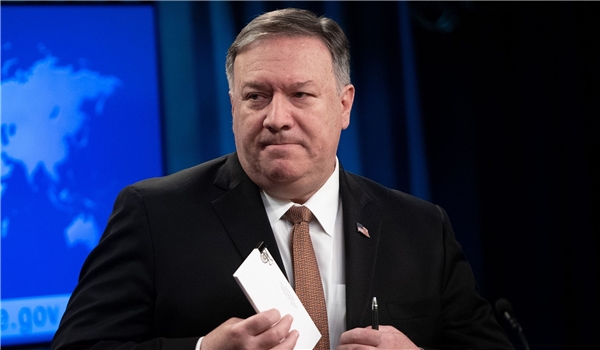 TEHRAN (FNA)- Iranian Foreign Minister Mohammad Javad Zarif lashed out at US Secretary of State Mike Pompeo for his anti-Iran comments even when the world is engaged in the battle against coronavirus.

"Even a pandemic won't stop Secretary Pompeo from spouting 3rd-rate propaganda," Zarif wrote on his Twitter page on Wednesday.

"No amount of trolling will gloss over his infamous warmongering and economic terrorism, killing innocents and impeding global fight against COVID-19," Zarif said.

His remarks came after Pompeo claimed on his twitter page on Wednesday that instead of inventing reasons to blame the US for what he called as Iranian President Hassan Rouhani government’s gross mishandling of coronavirus outbreak in Iran, he can better serve the Iranian people by saying “Yes” to the US offer of humanitarian aid.

President Rouhani had on Monday described the US offer to help Iran fight against the coronavirus epidemic as a big lie as the harshest sanctions against the country are still in place, saying that Tehran does not want Washington’s “glass of muddy water”.

“We are not in a normal economic situation; sanctions that are cruel, illegal and a terrorist action have been imposed by the US on the Iranian people, and unfortunately many problems have been posed to us,” Rouhani said, addressing a cabinet meeting in Tehran.

“Americans' saying we are ready to help Iran through the hardships of coronavirus is one of the great lies of history, as if someone who has blocked the source of the spring and does not let anyone go to the clear spring, brings a glass of muddy water to offer, saying that he has come to help, since he knows we're thirsty,” he added.

“The Americans, who are in charge of the biggest crimes in the region and committed crimes in Iran and terrorism in the true sense of the word, and when their thoughts and underpinnings of their misconduct and terrorism have become more apparent to the world, say we are ready to help in combatting coronavirus. This is the same glass of muddy water, but they do not say that they blocked the main springs on this nation,” he said.

The coronavirus COVID-19 is affecting over 195 countries and territories around the world. The virus was first reported in the central Chinese city of Wuhan late last year. It has so far killed more than 21,300 people and infected over 472,000 others globally.

Iran reported on Wednesday that a total number of 2,077 coronavirus patients have died and 27,017 cases of infection have been identified in the country so far. Meanwhile, 9,625 people have also recovered.