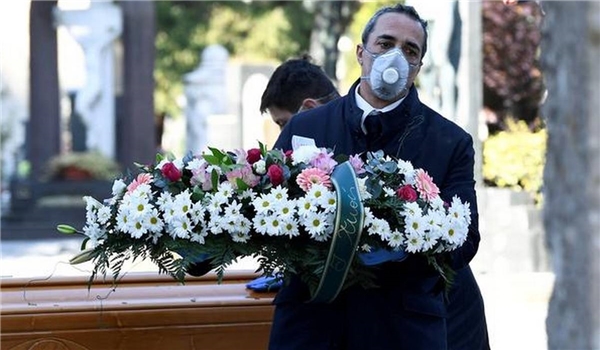 TEHRAN (FNA)- Italy on Wednesday reported 475 new deaths from the novel coronavirus, the highest one-day official toll of any nation since the first case was detected in China late last year.

Total deaths in Italy have reached 2,978, more than half of all the cases recorded outside China, while the number of infections stood at 35,713, AFP reported.

The previous record high of 368 deaths was also recorded in Italy, on Sunday.

The nation of 60 million has now recorded 34.2 percent of all the deaths officially attributed to COVID-19 across the world.

With the death rate still climbing despite the Mediterranean country entering a second week under effective lockdown, officials urged Italians to have faith and to stay strong.

"They main thing is, do not give up," Italian National Institute of Health Chief Silvio Brusaferro said in a nationally televised press conference.

"It will take a few days before we see the benefits" of containment measures, said Brusaferro.

"We must maintain these measures to see their effect, and above all to protect the most vulnerable," he said.

Imposed nationally on Mar 12, the shutdown of most Italian businesses and a ban on public gatherings are due to expire on Mar 25.

But school closures and other measures, such as a ban fan attendance at sporting events, are due to run on until April 3.

A top government minister hinted on Wednesday that the school closure would be extended well into next month, if not longer.

The rates within Italy itself remained stable, with two-thirds of the deaths - 1,959 in all - reported in the Northern Lombardy region around Milan, the Italian financial and fashion capital.

The neighbouring Emilia-Romagna region of Bologna has suffered a total of 458 fatalities, and Turin's Piedmont region has had 154 deaths.

Rome's Lazio region has a toll of 32 deaths and 724 infections.