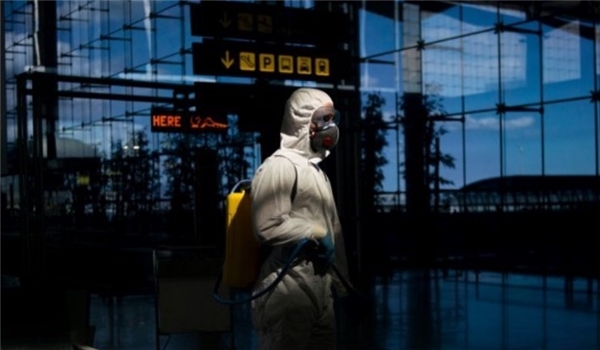 TEHRAN (FNA)- Governments grappled with how to implement border closures, travel restrictions and lockdowns that have caused transportation chaos and imperiled economies as coronavirus spread to all European countries as well as several Asian states.

Tens of millions of people across the world were hunkered down in government-ordered isolation Tuesday as borders slammed shut, schools and businesses closed and increasingly drastic restrictions on movement took effect, and others were scrambling to get home, caught up in widespread travel restrictions aimed to slow the spread of the fatal sickness.

Europe has now suffered more deaths from coronavirus than the whole of Asia, according to a new AFP tally, signalling that the pandemic could be spiralling out of control in the West as China finally manages to contain the virus.

Fatalities in Italy’s coronavirus outbreak have surpassed 2,500, with more than 31,000 infections. With a spike of 345 new deaths, Tuesday was among Italy’s most deadly in the Covid-19 outbreak gripping much of the Mediterranean nation, bringing the death toll to 2,503, out of a total 31,506 confirmed cases.

Since the contagion was first observed in Italy in late February, the country has quickly become Europe’s hardest-hit coronavirus hotspot. The explosion in cases and deaths triggered a nationwide lockdown last week, placing more than 60 million citizens under strict travel restrictions and shuttering most businesses across the country.

The Spanish government has nationalized all of its hospitals and healthcare providers in the country in its latest move to combat the spread of the coronavirus.

Spain is one of the worst-affected countries outside China, and its government has taken a number of extraordinary steps in an attempt to combat the spread of the coronavirus. The government last week declared a state of national emergency, closing schools and public spaces and telling citizens they can leave the house only to go to work and buy essentials like food and medicine.

There were more than 13,700 confirmed cases of the virus in Spain as of Wednesday, with 600 deaths.

Germany's Robert Koch Institute (RKI), the national agency for disease control and prevention, has also raised the risk of the coronavirus to public health to “high”.

RKI President Lothar Wieler stated that he assumed the number of coronavirus cases is "significantly higher" than reported to the institute.

Germany could be dealing with 10 million coronavirus infections in the coming months if its citizens do not adhere to measures aimed at slowing the spread of the virus, the country's top disease control official noted.

The German government is doing everything possible to repatriate thousands of Germans who are currently abroad, he stressed, and pleaded for citizens to not travel.

The country has over 9,400 coronavirus cases, with 26 deaths.

The spread of the virus across the UK capital is "a few weeks ahead" of the rest of the country, Khan added, citing guidance given by the government at Monday's emergency 'COBRA' meeting.

"I was told by the government, and the government's advisers, that London is a few weeks ahead of the rest of the country, and the way that this virus is spreading is faster than the government and advisers had thought," Khan noted during an interview with ITV’s Good Morning Britain.

There are at least 1,950 cases of the coronavirus in the United Kingdom, as the death toll reached to 71.

French Health Minister Olivier Veran stated that the country could hope to see the number of coronavirus infections to slowdown in about 8 to 12 days following the government's decision to lock down the country.

The country has confirmed more than 7,700 confirmed cases of coronavirus, with 175 fatalities.

In Switzerland, the virus is spreading throughout the country, which is one of the countries most affected by the coronavirus, with over 2,740 people testing positive and 27 deaths.

Switzerland's health-care system could collapse by the end of the month if the new coronavirus keeps spreading at current rates, a government official warned on Tuesday.

Belgium will impose a lockdown from midday on Wednesday to restrict the movement of people in order to contain the spread of the coronavirus. The country has reported more than 240 new infections, bringing the total to 1,490. Ten people have died.

The confirmed cases of the virus in Sweden, with eight deaths, and Denmark, with four deaths, have climbed to more than 1,000.

The number of cases of the coronavirus infection in Austria climbed to 1,470, with seven deaths reported.

The number of coronavirus infections in the Netherlands rose to 1,705, with 43 deaths. The cases in Norway reached to 1,490, with 4 fatalities.

Turkey's Health Minister Fahrettin Koca confirmed the country's first death from the coronavirus, an old patient. More than 50 new cases have been diagnosed, bringing the number of confirmed infections to nearly 100.

European Council President Charles Michel has announced that the EU’s external borders will be closed for 30 days to combat the spread of the coronavirus.

"The EU and its member states will do whatever it takes to address the current challenges," Michel announced.

European Commission President Ursula von der Leyen made the recommendation for the ban on Monday.

“The less travel, the more we can contain the virus,” she said, adding that the idea received overwhelming support and member states would work on how to implement the ban individually.

Football's Euro2020 Championship will be postponed for a year, in a widely expected move amid the spread of the coronavirus.

Coronavirus Confirmed in All 50 US States as Critical Supplies Shortage Hampers Hospitalshttps://t.co/RRdx8Njb4u pic.twitter.com/XyOuodr6IC

The World Health Organization (WHO) has called on Southeast Asia to take "aggressive" action to combat the coronavirus, warning that some countries were heading towards community transmission, which could overwhelm already weak public healthcare systems.

Malaysia shut its borders with Singapore, beginning a 14-day partial lockdown after coronavirus infections in the country spiked to the highest in Southeast Asia.

Indonesia on Wednesday reported 14 more deaths from the coronavirus and 55 fresh confirmed cases, the highest single-day jump for new infections. It brought the total number of fatalities to 19, while the total tally for patients testing positive surged to 227 since the country announced its first cases in early March.

The number of confirmed cases of the coronavirus in mainland China has reached 80,894, the Chinese health authorities announced on Wednesday. The death toll has risen to 3,237, and over 69,600 people have recovered.

The number of COVID-19 cases in South Korea has risen by 93, reaching 8,413. Three people have died in the past 24 hours, with the death toll reaching 84, South Korea’s Center for Disease Control and Prevention informed on Tuesday.

The number of disease cases in the Philippines soared to 202 on Wednesday after the Department of Health (DOH) confirmed 15 new cases. The number of deaths due to the fatal sickness rose to 17 after three new deaths were reported.

Indian authorities have stated they will not expand coronavirus testing, as most affected nations are doing, despite criticism that limited testing could leave COVID-19 cases undetected in the world's second-most populous country. There are at least 150 coronavirus patients in the Asian country, with 3 deaths related to the illness.

Saudi Arabia announced that mosques would no longer be open for the daily prayers or Friday congregations, as the kingdom has registered at least 171 coronavirus cases. Prayers will continue only at the two holy mosques in Mecca and Medina, the holiest places in Islam.

Lebanon has confirmed its fourth death related to the sickness, as the Asian country has reported more than 130 virus cases.

Qatar, with new cases bringing its total to 442, likewise closed shops not selling food or pharmaceuticals, and closed part of an industrial zone for at least two weeks.

The United Arab Emirates (UAE) has registered 15 new cases, raising its total to 113, and Kuwait identified 12, as the total stood at 142. Bahrain, with one death, confirmed 14 new cases, while the infected cases have risen to 255.

Brazil will seek authorization for a state of emergency to allow it to scrap fiscal targets and free up funds to combat the coronavirus crisis, the government announced on Tuesday, as President Jair Bolsonaro announced his second COVID-19 test was negative. The country has registered nearly 350 cases of the sickness, with two deaths.

While authorities in major cities shut their borders, announced major lockdowns and ordered curfews in an effort to stem the global spread of the coronavirus pandemic, thousands of people flocked to a two-day music concert in Mexico and the country's top women's football league played to stadiums full of cheering fans over the weekend.

The government of Mexican President Andres Manuel Lopez Obrador has faced harsh criticism for its seemingly lacklustre response and for downplaying the threat of the fatal disease.

More than 90 cases of COVID-19 have been confirmed in Mexico, with no deaths.

The Copa America due to kick off in June in Argentina and Colombia was on Tuesday postponed by a year to 2021 because of the coronavirus pandemic, organizers CONMEBOL announced.

Australia's government told its citizens Wednesday not to travel abroad and warned those already overseas to rush home as it took unprecedented steps to choke off the spread of the coronavirus epidemic Down Under. Australia has more than 550 confirmed cases of coronavirus and six fatalities.

Globally, nearly 8,000 people have died from the coronavirus and in excess of 200,000 cases have been confirmed in more than 160 countries, as the WHO has declared the virus a "pandemic", while Europe has become the epicenter of the outbreak.

TEHRAN (FNA)- Commander of the Law Enforcement Police's Border Guards Brigadier General Ahmad Ali Goudarzi said that the country has been facing threats originated in the designs of Global Arrogance, but meantime ensured that his forces have managed to defuse these threats.

TEHRAN (FNA)- The largest technology companies in the world, including Google, Amazon, and Microsoft, all have contracts with the American government and federal law enforcement agencies that had gone previously unreported.
﻿
﻿
Sections