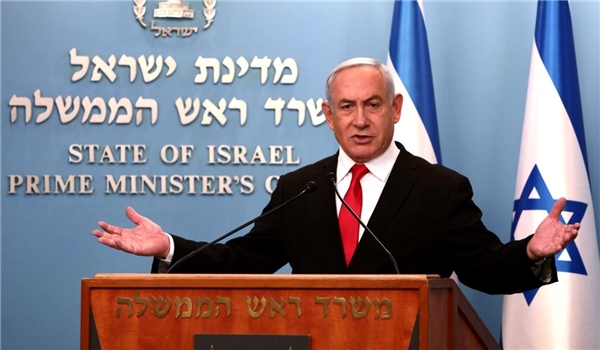 TEHRAN (FNA)- The corruption trial of Israeli Prime Minister Benjamin Netanyahu, which was due to start on Tuesday, has been delayed until at least May 24 due to a state of emergency declared by the Justice Ministry.

As Israel battles the spread of Covid-19 by shutting down public venues and planning Big-Brother-style surveillance of infected individuals, Justice Minister Amir Ohana announced a state of emergency for the country's courts, RT reported.

With all but a few sessions banned, one particular case has been put on hold.

The corruption trial of Netanyahu, which was scheduled to start on Tuesday at Jerusalem District Court, will not be able to proceed and has been postponed until at least May 24.

Earlier this week, the court rejected a request for a 45-day postponement of the trial, which Netanyahu’s defense team requested in order to get more time to review the evidence.

Israel currently has 200 confirmed coronavirus cases. On Sunday, the country’s Attorney General Avichai Mendelblit approved the use of Israeli state surveillance technology to track patients' cell phones at the request of Netanyahu. Other measures to curb the spread include imposing air traffic restrictions and demanding that foreigners arriving in the country self-quarantine.

The delay may be canceled if the 24-hour emergency is not extended, but Israeli media say this is highly unlikely. The NGO Movement for Quality Government also filed a motion asking the attorney general to block the minister’s order, citing his provisional status.

Netanyahu faces seven counts in three criminal charges, including fraud, breach of trust and bribery. He tried to secure immunity from prosecution from the Israeli Parliament ahead of last week’s general election, but withdrew the bid just before it could be heard by lawmakers as it was clear it would be rejected.

The vote itself was as indecisive as the two previous ones, keeping Netanyahu in office without a clear public mandate.

Amid the coronavirus outbreak, he has been calling on his prime competitor, Benny Gantz, to form an “emergency unity government”. Gantz’s party won 33 seats in the 120-seat Knesset, compared to Netanyahu’s 36.