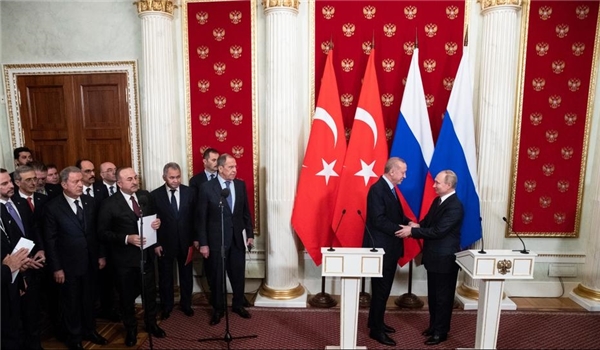 TEHRAN (FNA)- A prominent Syrian military expert warned that Turkey’s continued support for the terrorist groups and their equipment with new war tools will lead to the collapse of the ceasefire in Idlib.

“The information in the past few days indicates that Turkey is reinforcing the terrorists and their military equipment since signing a ceasefire agreement between the Turkish and Russian presidents,” General Mohammad Abbas told the Arabic-language al-Manar news channel on Tuesday.

He added that Turkey has supplied the militants with different weapons in addition to electronic warfare equipment for jamming Syria’s air defense systems.

Abbas noted that Ankara’s measures mean preparedness for new attacks to regain control of areas liberated by the Syrian army.

The terrorist groups in Idlib province of Syria have breached the ceasefire 33 times since Thursday, Russia's Reconciliation Center in Humeimem announced on Monday.

The terrorists stationed in Idlib have violated the truce eight times over the past 24 hours, the Russian Reconciliation Center said, adding that the total number of ceasefire violations has reached 33 since Thursday.

The Russian Reconciliation Center in Humeimem had previously announced that the Turkey-backed militants had violated ceasefire six times on Friday and 19 times on Saturday.

Turkish President Recep Tayyip Erdogan and his Russian counterpart Vladimir Putin on Thursday had agreed on a ceasefire in Idlib.

President Putin reiterated that Moscow and Ankara had voiced readiness to continue cooperation on Syria within Astana Talks framework.

The two sides also agreed on monitoring the de-escalation zone and conducting joint patrol in towns near Idlib city.

Meantime, the Syrian Army has voiced readiness to respond to terrorists' ceasefire violation.