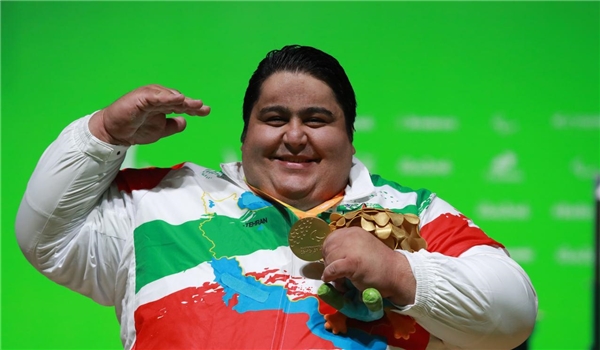 TEHRAN (FNA)- Iranian weightlifter Siamand Rahman, who was famous for breaking world records at Paralympics, passed away at the age of 31 following a heart attack.

Iran's two-time Paralympics gold medalist Siamand Rahman has passed away at the age of 31 following a heart attack.

He was the current Powerlifting World Record holder in the +107 kilogram category with a 310-kilogram bench press record, and held the junior world record with 290 kilograms, and the Paralympic Championship Record with 310 kilograms. Rahman was the first Paralympic lifter who has benched 270 kilograms.

Iran: UN Mistaken for US by Trump

TEHRAN (FNA)- Iran blasted US President Donald Trump for his remarks at the UN General Assembly meeting, saying that he has mistaken the world body for his country.

TEHRAN (FNA)- The Iranian foreign ministry rejected a report by the Guardian newspaper claiming that France, Germany and the UK are summoning Iranian ambassadors in a coordinated diplomatic protest against the country's detention of dual nationals.

Johnson Accused of Leading UK into ‘Another Winter of Discontent’

TEHRAN (FNA)- Prime Minister Boris Johnson was today accused of leading the UK into “another winter of discontent” amid fears of mass unemployment and a failing coronavirus testing system.

TEHRAN (FNA)- Some 145 Indian films have been submitted to the 16th Resistance International Film Festival which is currently underway in Tehran.

TEHRAN (FNA)- The Russian Embassy in Washington called upon the US government to focus its effort on fighting the coronavirus rather than criticizing the Russian vaccine.

TEHRAN (FNA)- Human Rights Watch (HRW) condemned the “harsh” police actions during the enforcement of a strict lockdown in Australia’s Victoria state, the epicentre of the country’s COVID-19 outbreak.

TEHRAN (FNA)- Western governments and their media outlets have been concocting narratives to sway public opinion in favor of militant groups operating in the Arab country, according to a report.
﻿
﻿
Sections