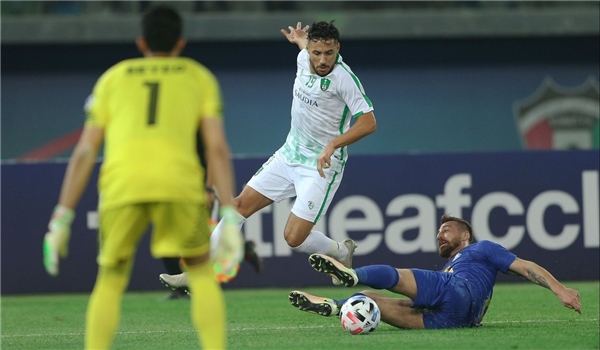 In the AFC Champions League match of Monday, Iran’s Esteghlal lost their second Group A encounter, going down 2-1 against al-Ahli of Saudi Arabia.

In the match held at the Jaber Al-Ahmad International Stadium in Kuwait City, Al-Ahli started the match strong and took an early lead 17 minutes into the game, thanks to a penalty by Salman Al-Moasher.

Esteghlal, however, fought back and made it all square in 22nd minute, when Arsalan Motahari found the back of the net from inside the box.

That was not the end of drama, as Al-Moasher regained the lead for the Saudi side in the 29th minute, after tapping the ball home into an empty net.

Esteghlal could have equalized the match in the 41st minute but Vouria Ghafouri failed to score his penalty.

The result puts al-Ahli at the top of the group, while Esteghlal remain third with only one point from two matches.

Earlier on the day, another Iranian club Shahr Khodro suffered a 3-nil defeat at the hands of Uzbekistan’s Pakhtakor in their second Group B encounter.

After a scoreless first half, Pakhtakor broke the deadlock, when Igor Sergeev swept the ball home from close range in the 56th minute.

Only three minutes later, the home side doubled their advantage, as Sergeev scored his second of the night, with a simple tap-in.

The Uzbek champions then put the game to bed, after Azamove powered a header into the back of the net, with three minutes remaining, to seal the full three points.

With the victory, Pakhtakor sit at the top of the table with six points, above the defending champions, al-Hilal, on goal difference.

A week earlier, Esteghlal was held with a 1-1 draw against Al Shorta of Iraq at Franso Hariri Stadium in Erbil. The Iraqi side’s Hussam Kadhim opened the scoring in the wrong net 24 minutes into the game. The equalizer right after the break when Ali Fayez scored a goal from the penalty spot for the host.

Shahr Khoro, experiencing its first participation in the top Asian event, suffered a 2-0 defeat against the reigning champion Saudi Arabia’s Al Hilal in their first match of Group B at UAE’s Al Wasl Stadium.