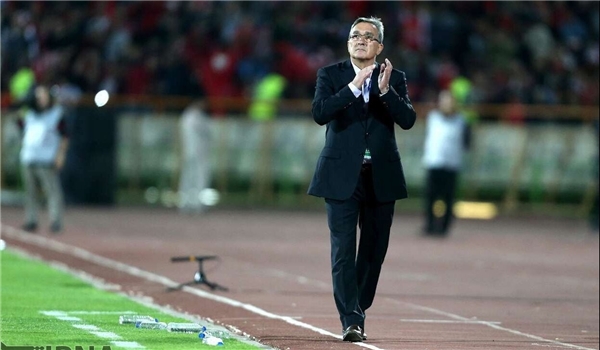 TEHRAN (FNA)- Former Manager of Iran's FC Persepolis Branko Ivanković rejected on Wednesday the AFC claims about insecurity in the Islamic Republic, adding that he witnessed no security concerns in the 4 years that he coached the red giants of Tehran.

Ivanković said this morning that during his four-year life in Iran, he saw no security concerns in Iran, rejecting the anti-Iran claims made by the Asian Football Confederation (AFC).

He noted that his long stay in Iran is the best response with regard to national security in Iran.

The Croatian professional football manager expressed hope for solving the problem with Asian Football Confederation not allowing Iranian Football clubs to host their own matches.

He noted the Iranian football spectators are really passionate and have always had massive turnout in Asian Champions League.

The Football Federation of the Islamic Republic of Iran (FFIRI) said on Friday that the AFC had sent a letter announcing all international matches involving Iranian teams must be held in a third country.

The FFIRI said it held a meeting on the matter shortly after receiving the letter.

The FFIRI also informed earlier that in the upcoming days, it would announce its eventual stance on the AFC decision which would deprive Iran of a main advantage.

On Tuesday, the American player of Shahrdari Gorgan Basketball Team, Perry Petty, dismissed claims about insecurity in Iran, saying that he is living and playing in the country in high safety and security.

Iran is a safe and calm land for living, Petty told reporters, rejecting negative propaganda campaign to show Iran as an unsafe country.

He added that despite escalation of tensions between Iran and the US in the last few months, the Iranians' behavior has not changed toward him.

Petty said that all American players in the Iranian Super League have the same idea with regard to safety in Iran.

The American player also rejected rumors regarding him that Iran is not a safe country and he is afraid of being in Iran.

Spokesman for the FFIRI Amirmahdi Alavi said that the AFC should avoid “false” notions regarding Iran.

“Iran is fully ready to host various teams as it has repeatedly proven during the past several years,” he said.

One day before the FFIRI received the letter, Waleed al-Faraj, which hosts a popular soccer program on the Arabic-language SBC channel from Saudi Arabia, said that “informed sources” had notified him of the ruling.

He said the decision had been taken due to Iran's “security situation”.

The host said Iran’s rivals could host competitions with Iran in their own countries, despite the new ruling.

Al-Faraj’s revelations were picked up by Iranian media, which pointed at Saudi Arabia’s long interest and past attempts in lobbying against international competitions held in Iran.

The AFC is currently led by Salman bin Ibrahim Al Khalifa, a member of the House of Khalifa, the royal family of Bahrain, which has very close ties with Riyadh.

The controversial decision comes a few months after the International Judo Federation (IJF) banned Iran from taking part in international competitions for its athletes’ refusal to compete with Israeli opponents.

Observers noted at the time that Israeli-backed lobbies might be seeking to ban Iran from competing in other international sports - such as chess competitions - due to the refusal of Iranian athletes to compete with Israeli rivals.

The Sports Ministry has given the required security guarantees to the Asian Football Confederation, highlighted Alavi.

He called on the AFC to stand against any inaccurate remarks and claims about Iran’s ability to host matches.

Earlier, Al-Anba newspaper claimed that the matches between Esteghlal and Kuwait SC, which is due to be held on January 21, has been postponed due to Kuwaiti officials' concerns over the security situation in Iran which they have discussed with the AFC officials. The daily also claimed that Doha has been chosen as a neutral venue for holding the match at the 2020 AFC Champions League Preliminary Stage Two.

All the four Iranian clubs present at the tournament have stressed their defiance of the AFC astonishing ruling.

Esteghlal Football Club – which is usually one of Iran’s main contenders in international competitions – has officially rejected the latest decision of the AFC to ban its country from hosting international soccer matches, cautioning that the move is politicizing sport.

Esteghlal has issued a statement saying it will refuse to compete in any competition in a third country, underlining that the football club rejects the AFC decision and believes it is for “political” reasons.

Mahdi Mohammad Nabi, member of the board of directors of the high-ranking Persepolis Football Club, also said that the AFC ruling was based on groundless claims.

“This decision was taken without justifiable evidence and in disregard for international and national laws of member states,” he said.

Nabi added that the ruling defied article four of the FIFA Statute and article 13 of the AFC Statute which rule out discrimination against member-states.